There Will Be Thunderstorms Which Will Shake Cities: Flash Flood 6 Souls Perish Including 5-Member Family, In Northern Vietnam 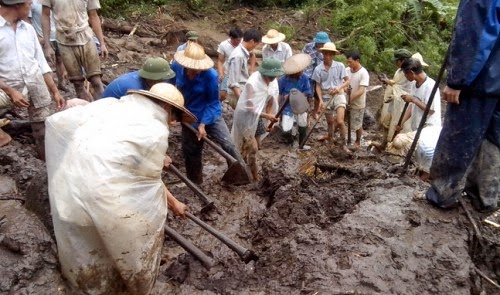 
August 2014 (Tuoitrenews.vn)Six people, including five from a family, were killed during a flash flood that swept through Tam Duong District of the northern Vietnamese province of Lai Chau on Tuesday, local authorities said. The flash flood followed downpours that hit the district early the same day, said Vu Van Luat, chief of the secretariat of the provincial Steering Board for Storm and Flood Prevention and Control. Among the victims were Tan La U, a member of the Dao ethnic minority, his wife and their three children who lived in the district’s Tam Duong Town, Luat said. They were swept away by floodwater early in the morning and their bodies were all found in the evening, he added. Meanwhile, a serious landside caused by the flashflood occurred in the district’s Son Binh Commune, yesterday afternoon, killing a five-month-old baby girl and injuring both her parents, who were hospitalized for treatment, the official said. The district authorities have visited and given support to the families of the victims. According to the Central Hydro-Meteorological Forecasting Center, northern provinces including Lai Chau will continue to experience medium and heavy rains, possible together with thunderstorms, until Thursday, August 14. Rainfall in the mountainous areas will reach 150mm and flash floods as well as landslides may continue to happen, the center warned.