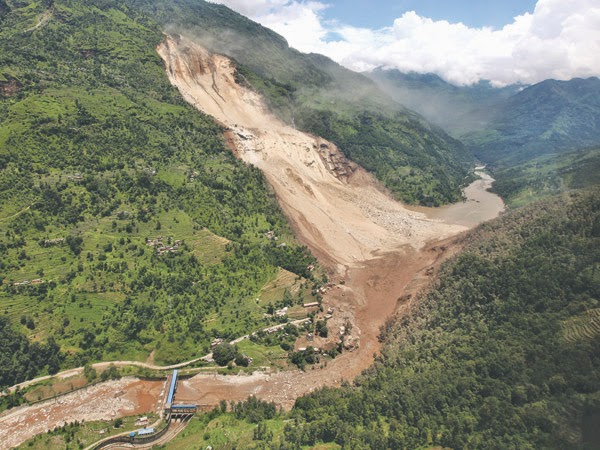 NEW DELHI August 2014 (WSJ) —Rescue operations in Nepal were hampered Sunday by rainfall and a fresh landslide after a major landslide Saturday swept down a valley northeast of the capital city, Katmandu, killing at least eight people and forcing thousands to evacuate, senior Nepalese government officials said. "It's very difficult to carry on our search operation," said Yadav Prasad Koirala of Nepal's home ministry in an interview Sunday. He said a more accurate count of the missing and injured could begin only after the second, smaller landslide came to a stop. The Saturday-morning slide blocked Nepal's Sunkoshi River for at least part of the day, creating a vast lake, as one official described it, and raising fears of destruction downstream if the blockage were to break. However by late Saturday the Nepalese army had blasted away chunks of the blockage, reducing the risk. "River flow continues to be normal," Mr. Koirala said, "Though our teams are on high alert." The official said eight bodies had been recovered so far, and some 8,000 people evacuated from villages in the area and downstream. The Associated Press reported Sunday that Nepalese officials were expressing skepticism that survivors would be found. The disaster struck Nepal just a day before the arrival of Indian prime minister, Narendra Modi, to discuss cross-border relations. Mr. Modi landed on Sunday, marking the first bilateral visit by an Indian prime minister in 17 years.

Among the shared interests between India and Nepal is the stewardship of waterways. Saturday's landslide in Nepal raised fears of flooding downstream in the Indian state of Bihar. An Indian government official said Bihar had been put on alert to the possibility of flooding there and as many as 44,000 people have so far been evacuated from the areas that could be affected in case of floods. Mr. Koirala said a team of five officials from India reached Nepal on Saturday evening to advise efforts to minimize the possibility of flooding from the river. Landslides are common in Nepal, particularly during the rainy season, given the country's mountainous terrain and steep Himalayan valleys. It is monsoon season across South Asia. Saturday's slide struck in Sindhupalchok district, officials said, in an area about 100 miles northeast of Katmandu, near the villages of Ramche and Mankha. After the landslide blocked the Sunkoshi, a police official said, the water began rising to a threatening level. Nepal's Araniko Highway runs through the stricken area, an important route that connects Nepal to China by road at the Friendship Bridge. It's the second significant landslide in South Asia in recent days. A slide earlier in the week in the Indian state of Maharashtra has left at least 87 people dead so far, though officials say the toll there could climb to more than 100.