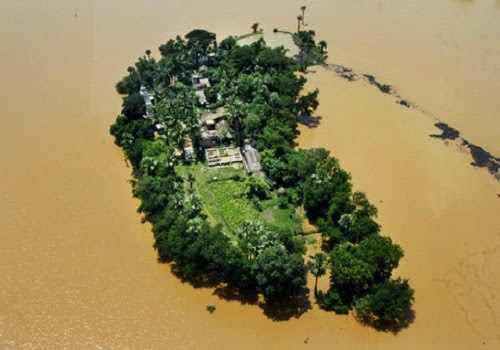 August 2014 (Indian Express) Flood waters engulfed vast areas of the delta region of Mahanadi river system in Odisha even as the death toll due to heavy rains and floods in the state climbed to 34. As many as 9.95 lakh people in 1,553 villages of 89 blocks in 23 districts have so far been affected due to the floods, the Special Relief Commissioner said. “Though river Mahanadi is flowing above danger mark at several places, there is no threat of substantial damage as the water flow into Hirakud reservoir has come down,” Special Relief Commissioner (SRC) P K Mohapatra said.The death toll due to floods and heavy rain in different parts of the state went up to 34 with seven fresh deaths reported since Wednesday, the SRC said, adding, most of the casualties were due to drowning and wall collapse. “It is a matter of relief that fear of a major high flood has been averted. Volume of water flowing down Mahanadi at Munduli stood at around 11 lakh cusec as against over 12 lakh cusec anticipated earlier,” he said. The level in Hirakud reservoir stood at 628.08 ft as against its full capacity of 630 ft and 50 of the 64 sluice gates were opened for discharge of excess water, said Biswajit Mohanty, Chief Engineer of Hirakud dam.