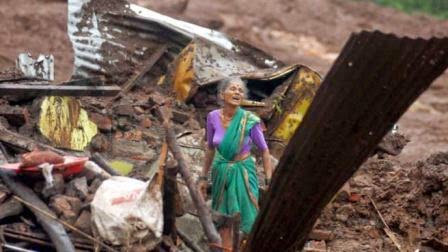 PUNE, July 2014 (Times Of India): With the recovery of six more bodies, the death toll in Malin village landslide disaster has gone up to 136, even as health officials are sanitising the area in view of the unhygienic conditions there due to decomposing bodies. The district control room said the 136 dead included 53 men, 65 women and 18 children. The National Disaster Response Force (NDRF) jawans have also extricated 33 carcasses of animals from the huge mound of debris that buried the village near here on July 30. Rain and marshy land mass created by mud continued to hamper movement of JCBs and other heavy equipment pressed into service to remove the debris, officials said. NDRF jawans wore face masks to protect themselves from the unhygienic conditions and stench of decomposed bodies. The hopes of finding survivors have died as the rescue operation entered the seventh day today.