Snow On The Ground In FORTY-NINE States! The Society Of Men Is On The Eve Of The Most Terrible Scourges And Of Gravest Events! 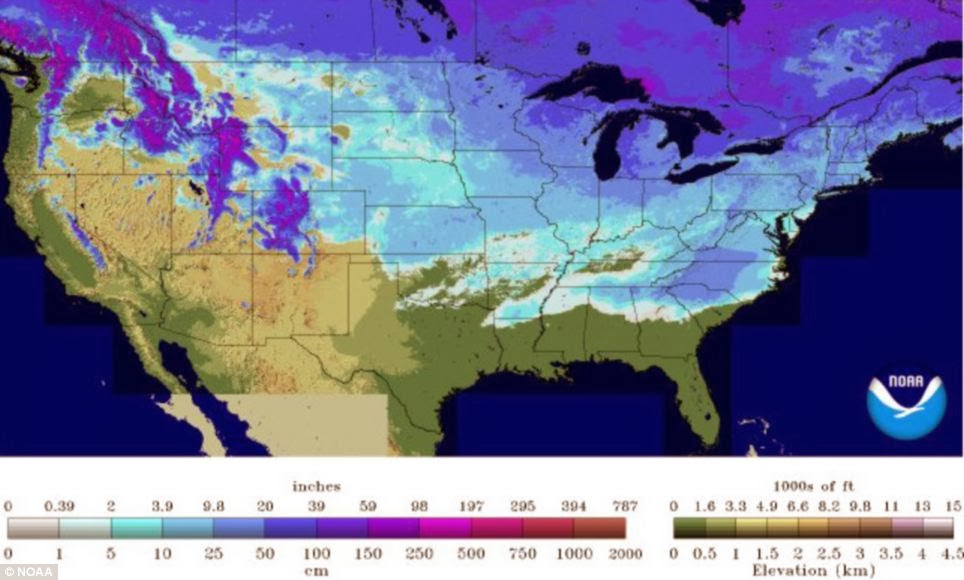 
There was snow on the ground in 49 states on Thursday as the season's biggest winter storm pummeled the Northeast, dumping a foot of snow on cities, knocking out power to more than half a million residents and grounding thousands of flights. Only Florida was free of snow, according to a map produced by the National Oceanic and Atmospheric Administration on Thursday - and even the mountains of Hawaii and California had a sprinkling of the white stuff, USA Today first reported. But it was the Northeast that suffered the most: New York was slammed with up to 15 inches of snow, while Boston could still see eight inches and Philadelphia could get 11 inches. Baltimore awoke to 15 inches of snow, while nearby in Washington D.C., the city all but shut down after 11 inches accumulated in some areas overnight. Federal offices and the city's two main airports were closed, and streets were nearly deserted during the normally frantic commute. And forecasters warned that it's not over yet. Snow is expected to fall throughout the evening in Baltimore before heading further north to Massachusetts, New Hampshire and Maine on Friday. In cities including New York, the rain will slow and icy rain will begin to fall instead. The snowstorm, which started out in the southern states on Wednesday, has canceled more than 7,000 flights nationwide today, killed as many as 18 people and left more than 700,000 residents without power across 14 states. In New York, Mayor Bill de Blasio came under fire for deciding to keep schools open - a choice some called a 'mistake'.Daily Mail Read More>>>>>