Several Cities Will Be Shaken Down And Swallowed Up! Corvette Museum Swallowed Up By Sinkhole! 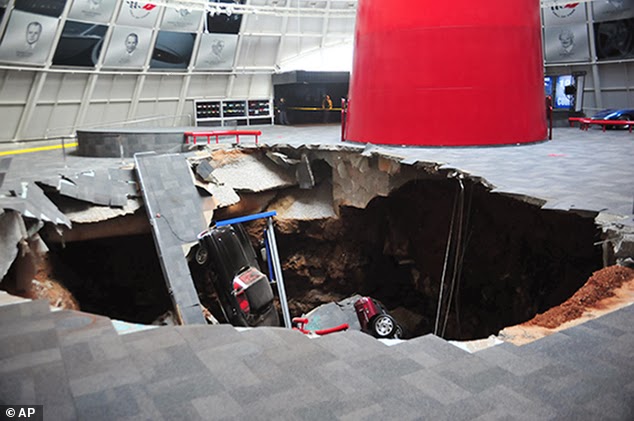 
12 Feb. 2014  BOWLING GREEN, Ky. (AP) — It was a sight to make a classic car lover weep: A gaping sinkhole opened beneath the National Corvette Museum in Kentucky and swallowed eight prized cars like they were toys, piling them in a heap amid loose dirt and concrete fragments. It happened early Wednesday morning while the attraction dedicated to the classic American sports car was closed to visitors. "They're all just kind of nose down in the bottom of the hole," said Western Kentucky University engineering professor Matt Dettman, part of a team brought in to assess the damage and stability of the surrounding area. Six of the cars were owned by the museum and two — a 1993 ZR-1 Spyder and a 2009 ZR1 Blue Devil — were on loan from General Motors, said museum spokeswoman Katie Frassinelli. The other cars damaged were a 1962 black Corvette, a 1984 PPG Pace Car, a 1992 White 1 Millionth Corvette, a 1993 Ruby Red 40th Anniversary Corvette, a 2001 Mallett Hammer Z06 Corvette and a 2009 white 1.5 Millionth Corvette. Daily Mail Read More>>>>>