Landslides Kill 11 Souls in Indonesia's Easternmost Province Of Papua! At The First Blow Of His Thundering Sword, The Mountains And All Nature Will Tremble In Terror! 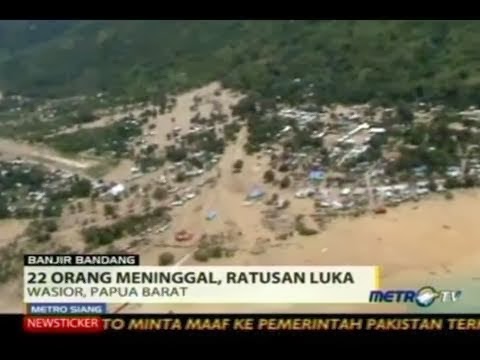 23 Feb 2014 TORRENTIAL rains have triggered floods and landslides that have killed at least 11 people in Indonesia's easternmost province of Papua. The National Disaster Mitigation Agency says two people are still missing after the landslides hit three locations in the provincial capital of Jayapura. More than 50 houses have been damaged in the landslides and flooding due to incessant rains that began Saturday night, he said. Rains also caused three rivers in the city to overflow. The disaster agency spokesman Sutopo Purwo Nugroho says rescuers - including soldiers, police and volunteers - are still searching for the two people missing and are opening access to the affected areas. Seasonal downpours cause dozens of landslides and flash floods each year in Indonesia, a vast chain of 17,000 islands where millions of people live in mountainous areas or near fertile flood plains. Australian