Landslide Isola, Southern France Claims 2 Souls! At The First Blow Of His Thundering Sword, The Mountains And All Nature Will Tremble In Terror! 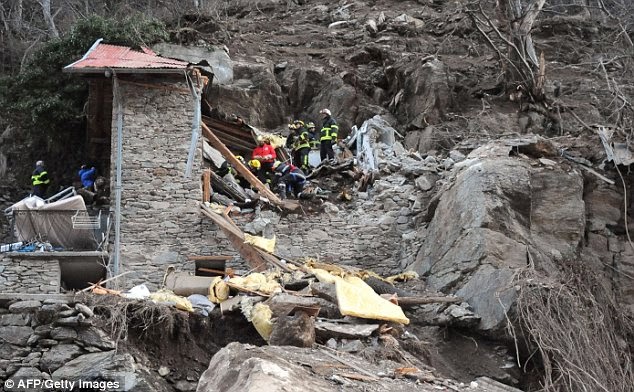 
23 Feb. 2014 Two boys were crushed to death today when a giant boulder destroyed the Alpine ski chalet in which they were sleeping. The horrific accident took place this morning just before 5am close to the British-built resort of Isola 2000, in southern France. ‘It happened in a chalet on the outskirts of the village,’ said Jean-Marie Bogini, the mayor of the village of Isola. ‘There was a landslide. There were seven people in the house – five adults and two children.’Mr Bogini said the some members of the two families in the chalet managed to escape, but the youngsters, aged seven and 10, could not get out. None of the victims have yet been identified. Three adults pulled themselves out of the collapsed chalet while two others had to be dug out. The bodies of the boys, one from each family, were found by sniffer dogs some two hours later, and then removed. Chilling pictures from the scene showed the three-storey building reduced to a pile of rubble. Local emergency staff were scrambled to the scene after a boulder, 32ft high and 16ft wide, was dislodged from the cliff above. Daily Mail Read More>>>>>