Several Cities Will Be Shaken Down And Swallowed Up! Georgia Woman Swallowed Up By 8ft Sinkhole! 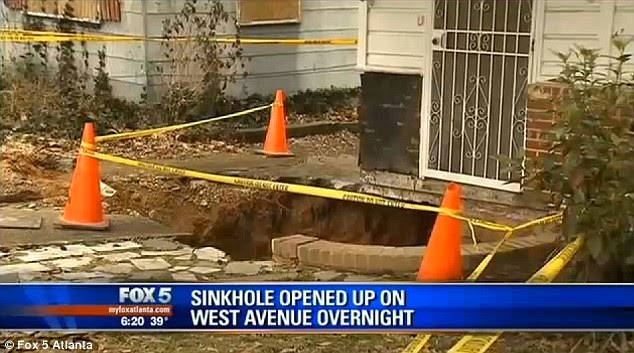 
6 Feb 2014 An elderly Atlanta man watched in horror as his wife, 74, was swallowed by an eight-foot deep sinkhole that opened up outside the front door of their home. But amazingly, Annie Kent escaped the ordeal with only minor injures after her husband Aaron, 76, managed to pull her to safety from 12-foot wide pit on Wednesday.. City officials told Fox 5 the hole was caused by a privately installed drain, and that they aren’t responsible for paying to have the problem fixed.‘I walked through the [front] door and next thing I know [she] fell in,’ Aaron Kent told the station. Despite tumbling into the giant hole, his wife suffered only cuts and bruises. ‘She said her hip was hurting a little bit,’ Kent explained, ‘I think it scared her more than anything else.’ Daily Mail Read More>>>>