Several Cities Will Be Shaken Down And Swallowed Up! Twenty-Foot Sinkhole Swallows Florida Woman's Driveway 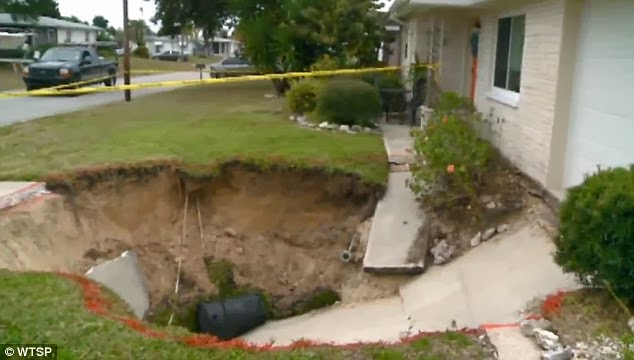 
27 Jan. 2014 Pasco County, Florida -- Residents are allowed to return to their homes after potential sinkhole opened up in a driveway. A few homes on Calais Drive were evacuated Sunday morning after the potential sinkhole opened up. The home where the hole opened up belongs to a 72-year-old woman. She was able to make it out of her home, along with her two cats, without any injuries. Although residents are allowed to return to their homes, many are still on edge. "If you had a sinkhole, you would be worried to. We don't want it to grow," says George Kimball, who lives right next door to the hole."I could not believe it until I saw it with my own eyes," says Joy Zupancic. Although it has yet to be confirmed if it is a sinkhole, former state senator Mike Fasano says it wouldn't matter because of new legislation passed a few years ago. Insurance companies do not have to cover you if your home is not affected.WTSP