The First Blow Of His Thundering Sword, The Mountains And All Nature Will Tremble In Terror: 7.1 Magnitude Earthquake Strikes Chiapas, Mexico: 5 Souls Perish Hundreds Left Without Shelter! 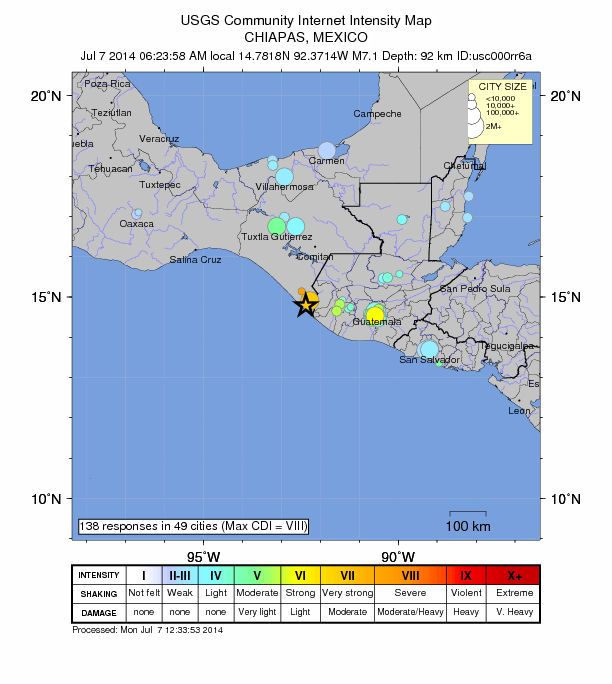 “At the first blow of His thundering sword, the mountains and all Nature will tremble in terror, for the disorders and crimes of men have pierced the vault of the heavens. Paris will burn and Marseilles will be engulfed. Several cities will be shaken down and swallowed up by earthquakes. Seismographs have picked up a swarm of earthquakes in the northwestern corner of Yellowstone National Park, including dozens early Tuesday.Our Lady of La Salette 19 Sept. 1846 (Published by Mélanie 1879)

MEXICO - At least five deaths were reported after a magnitude-7.1 earthquake rocked much of southern Mexico and Central America on Monday. The U.S. Geological Survey said the temblor, which hit at about 7:23 a.m ET, was centered about 5 miles northeast of the town of Puerto Madero near the Guatemala border. At least two people are reported dead in Guatemala. Firefighters spokesman Raul Hernandez said at least two people were killed in the Guatemalan town of San Marcos. In Mexico, local news media reported the quake was felt strongly in the Mexican states of Chiapas and Tabasco, but there were no immediate reports of damage or injuries. The quake was centered 57 miles below the surface. The earthquake was later downgraded to a 6.9 magnitude event by the USGS. It would’ve been the 9th such 7+ magnitude event in a year that is only supposed to barely average 15 such sizable earthquakes. Scientists reported in the journal Geophysical Research Letters in June that the number of large earthquakes happening in the first part of this year had doubled, though the cause for the escalation couldn’t be exactly identified. “We have recently experienced a period that has had one of the highest rates of great earthquakes ever recorded,” said lead study author Tom Parsons, a research geophysicist with the U.S. Geological Survey (USGS) in Menlo Park, California. The cause of the escalated seismic activity, said Parsons remains unknown. –AP