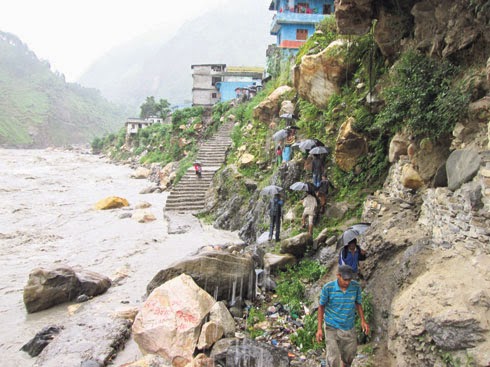 
MAHENDRANAGAR/DADELDHURA, July 20: Floods in the Mahakali River triggered by three days of incessant rainfall have already claimed at least eight lives in the far-western region. Deputy Inspector General of Police Jaya Bahadur Chand, the chief of Far-Western Regional Police Office, Dipayal, informed that of the eight killed two were from Baitadi, one from Dadeldhura, two from Doti, one from Kailali, and two from Kanchanpur. The flooding has left over 500 houses submerged in the hills of the far-western region, District Police Office of Kanchanpur informed. As per the DPO, swollen Mahakali and Jogbudha rivers inundated around four hundred houses at ward number eight and nine of Dodhara VDC. Five houses of the VDC have already been swept away in the deluge, and seven more houses in the village face similar predicament. Republica Read More>>>>