At The First Blow Of His Thundering Sword, The Mountains And All Nature Will Tremble In Terror: Over 30 Souls Perish In China Landslides 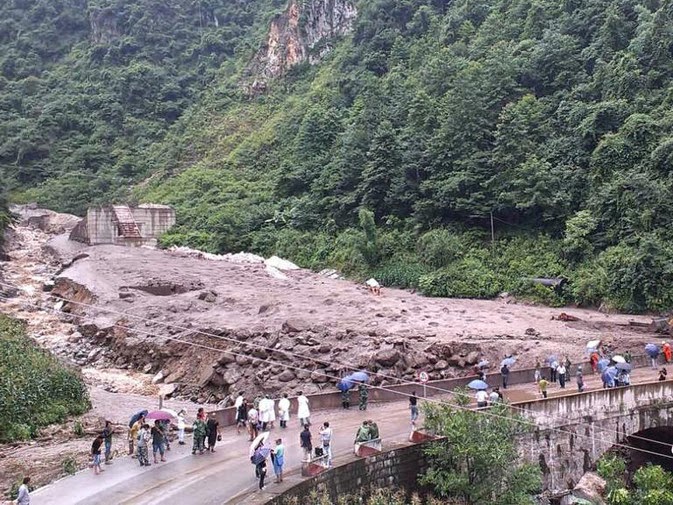 
KUNMING, July 9 -- Six people have died and 25 remain missing after mudslides hit two counties in southwest China's Yunnan Province early on Wednesday. In Shawa Village, Fugong County, a mudslide destroyed a silicon mining site at around 3 a.m., leaving 17 people missing, said Li Hongwen, the Communist Party chief overseeing rescue work. The missing may have been swept into the river or buried under the mud and rock debris. More than 140 rescuers are searching the site, about 500 meters from the Nujiang River. "Around three in the morning, I heard a sudden noise behind the wall and thought it was the river flooding into the house," said Lou Jinhao, a miner at the site."Without time to dress, I rushed outside where I realized it was mudslides," he said. Another mudslide at around 2 a.m. in Minzhu Village, Yunlong County, killed six people. Eight others are still missing, according to the civil affairs bureau of Bai Autonomous Prefecture of Dali. Communication with the village was cut off as the mud blocked roads to the village and damaged farmland, houses, power and telecommunication facilities. More than 200 people are working at the scene. In the coming three days, rain will continue in the two disaster areas and making rescue work even more difficult, according to Yunnan's provincial meteorological station, which urged local authorities to remain on high alert. Most of Yunnan has entered the annual flood season with continuous downpours. As of June 30, a total of 61 people in Yunnan had been killed or were missing due to disasters brought by the heavy rains, according to the provincial meteorological bureau. Mountainous areas cover more than 90 percent of Yunnan, which frequently suffers mudslides, landslides and floods. As of 2 p.m. Wednesday, the rain had affected 43,000 people in four cities and prefectures, destroying 15,000 hectares of farmland. Including the Wednesday's casualties, a total of 13 people are known to have died and other 33 remain missing. Direct economic losses are estimated at 84 million yuan (about 13.5 million U.S. dollars). The provincial government has sent three teams to the worst affected regions. English People Daily