Three Souls Perish In 'Unbelievably Big' 4 Mile Wide 250 Feet Deep Mudslide In Colorado: At The First Blow Of His Thundering Sword, The Mountains And All Nature Will Tremble In Terror 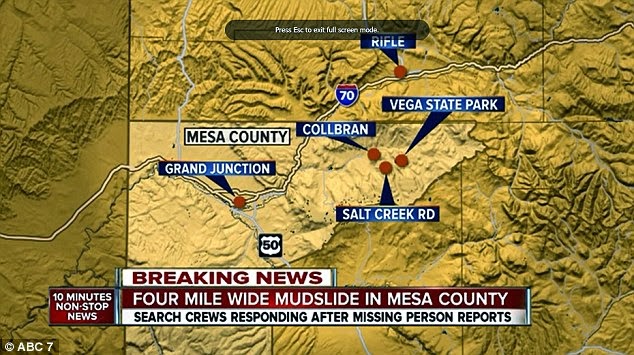 (Daily Mail) Rescue teams are searching for three people reported missing after a large mudslide struck in western Colorado’s Mesa County. The slide hit Sunday in a remote area near the town of Collbran, about 40 miles east of Grand Junction. Rescuers raced to the scene when it was reported around 6 p.m MDT, but eased operations after nightfall, Mesa County Sheriff’s spokeswoman Lisa McCammon said. There’s 'not a lot of activity tonight,' she said. The 'slide area is very unstable.' She said a daylight search was safer. The department estimated the slide is about 4 miles long, 2 miles wide and about 250 feet deep in many places. 'This slide is unbelievably big,' Mesa County Lt. Phil Stratton said. The department said crews were searching for three residents of the Collbran area after they were reported missing in the slide area, situated near Salt Creek road and Vega Reservoir. The site is in a rural part of the county and there were no reports of any structures damaged or major roads affected, McCammon said. The sheriff’s office said that the person who reported the slide at about 6:15 p.m. 'described hearing a noise that sounded much like a freight train.' A unified incident command has been established between Plateau Valley Fire Department and the Mesa sheriff, to handle the slide and search for the people possibly caught in it. Authorities say the heavy rains that fell over the weekend contributed to the slide. The avalanche occurred about two months after a massive mudslide hit the Washington state community of Oso on March 22, killing 43 people. The National Weather Service in Boulder, Colorado issued an advisory this month warning that monsoon rains which caused flooding in the state last September could increase the possibility of landslides as the state's deep snowpack melts. 'The September 2013 rains likely destabilized hillsides and steep slopes, so increased landslides and rock slides will also be possible this spring, particularly with heavier or prolonged rainfall,' the weather service said. Roadblocks have been set up to keep people from the rural area. Conditions are described as “very unstable” by authorities.