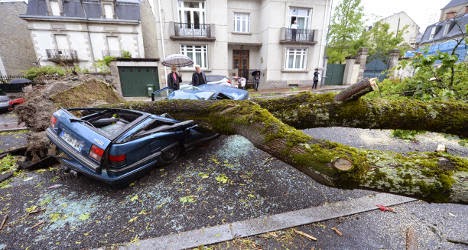 (The Local) A passenger in a camping car in the department of Aveyron and a sixty-year-old woman in Dordogne were killed on Wednesday as violent storms, accompanied by gale force winds and downpours swept across the country. The passenger in the campervan was killed when a tree was blown over in gale force winds in the town of Bozouls. The driver of the vehicle escaped unhurt, according to Europe1 radio. According to one witness emergency crews tried to resuscitate the victim but were unable to save him. “They were just in the wrong place at the wrong time. Five seconds later and they would have been fine,” the witness said. The sixty-old woman was killed in the Dordogne town of Bira, when the roof of a barn collapsed. A 40-year-old woman who was with her was also seriously injured and had to be rushed to hospital. The storms which an area of France from the Pyrennees to Paris and Pas de Calais region also left more than 51,000 homes without power at various stages on Wednesday. Some 28,000 homes were still without electricity on Thursday morning in Aquitane, Midi-Pyrenees, the Auvergne and Limousin. Officials said power should be restored at some point on Thursday. Orange alerts that were imposed in 32 departments on Wednesday have now been lifted.