Several Cities Will Be Shaken Down And Swallowed Up! Baltimore City Street Washes Away Taking Several Cars With It! 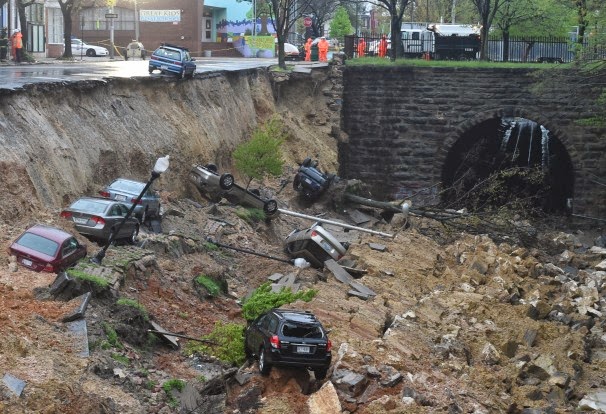 (WP) A street in the Charles Village neighborhood of Baltimore collapsed Wednesday, washing away cars and flooding CSX railroad tracks that run below street level. Ian Brennan, a spokesman for the Baltimore fire department, said no injuries were reported. One lane of the East 26th Street between North Charles and St. Paul streets collapsed about 4 p.m. and slid down an embankment leading to the tracks below. The cause of the collapse was unclear, but it came on a day that the region was experiencing heavy rainstorms. Several streets were closed late Wednesday afternoon. St. Paul and Charles are major thoroughfares that are generally crowded during both the morning and evening commutes. The neighborhood is largely residential rowhouses. Traffic was reported to be snarled in the area of the collapse and downtown. Brennan said no houses were damaged, but fire officials said many residents living along East 26th Street were ordered to leave until building inspectors can assess their properties. Photographs show a wide area of destruction in what appears to have been a landslide. The railroad tracks are covered with water, dirt and more than a half-dozen cars that went down the embankment. Baltimore officials said CSX has suspended rail service through the city. A spokesman for CSX did not immediately return a call seeking comment.