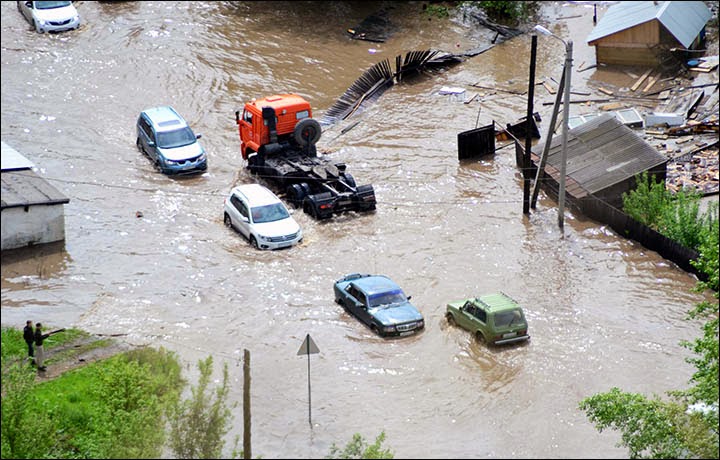 (The Siberan Times) A state of emergency was declared in the mountainous Republic of Altai after four days of extreme rainfall in southern Siberia. In all, 20 road and pedestrian bridges were damaged, leaving villages cut off. Almost 4,000 houses were flooded in the deluge with more than 9,000 people hit including 2,000-plus children. The destruction of a bridge in Chemalsky district caused an accident with the overturning of a GAZ-66 killing two people. Reports said another four had died in the flooding which has also hit Khakassia and Tuva, with fears for Altai region, as well as Krasnoyarsk, Irkutsk and Transbaikal. The Russian Emergencies Ministry (EMERCOM) and local authorities were working to assist people in the latest flooding to hit Siberia, an increasing phenomenon blamed by some experts on global warming. Two Ilyushin Il-76 planes were sent to Siberia carrying rescue equipment, KAMAZ trucks and boats. More than 2,000 people and 630 appliances were involved in the rescue efforts, along with dozens of boats. Emergencies Minister Vladimir Puchkov said: 'We are enlarging our rescue group in Siberia. 'We are tasked with protecting all the townships and potentially hazardous areas. Meanwhile, a special space system monitors the situation and the met office and all the federal structures are engaged.' Residents were urged to remain calm, take care of the safety of children and the elderly, and refrain from travelling to worst-hit areas. Puchkov dispatched the Tsentrospas national rescue team and the Leader Centre team for high-risk rescue operations to the flood-hit regions. He promised victims would receive from 10,000 roubles to 100,000 roubles ($287 to $2,878) in compensation. Russia's Hydrometeorological Centre warned of the risk of more heavy rain, with lower temperatures and more showers and thunderstorms, resulting in further flooding.