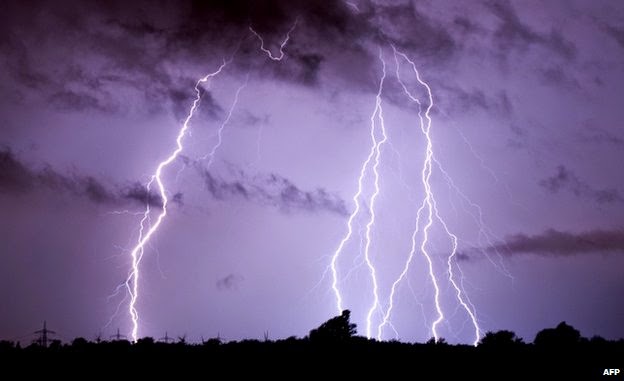 
BBC Six people have been killed in violent storms which battered cities in western Germany overnight. In the worst incident, three died when a tree fell on a garden shed in Duesseldorf where they had sought shelter, emergency services said. Cyclists were also killed by falling trees in Cologne and Krefeld and a sixth person died while clearing a street in Essen. The storms ended a heatwave that lasted throughout the Whitsun weekend holiday.Public transport was badly hit in much of North Rhine-Westphalia on Tuesday morning, and authorities urged people to avoid Duesseldorf, where trains, roads and the airport were all affected. During the night, emergency services removed the bodies of three people from a garden shed in the city. Three other people who had taken refuge in the shed were injured, two of them seriously. Several others were hurt elsewhere in the city. Two red pandas were reported missing from a zoo in Gelsenkirchen in the aftermath of the storm, with one since recovered and receiving medical assistance for shock, zoo officials said. Local residents have been asked to notify the zoo if they spot the remaining missing panda. Streets in Duesseldorf were blocked by fallen trees and there was damage to overhead power lines. The tram system was reportedly suspended. There were traffic jams on 270km (165 miles) of the region's roads during the morning rush hour, local broadcasters reported. Winds of up to 150km/h (93mph) were recorded at Duesseldorf airport on Tuesday night. Forecasters predict the storm will continue to move to the south and south-east of the country over the next two days, reports say. "We must reckon that the total damage will run into double-digit millions," North Rhine-Westphalia's Interior Minister Ralf Jaeger told German media. "That was one of the worst storms to hit (the region) in the past 20 years." Lower Saxony to the north has also suffered heavy damage. Temperatures of up to 36C (97F) were recorded in Germany at the weekend, the highest ever recorded for the time of year.