It Will Rain With A Fearful Hail Of Animals: Swarm Of Grasshoppers Spotted On RADAR Over Albuquerque! 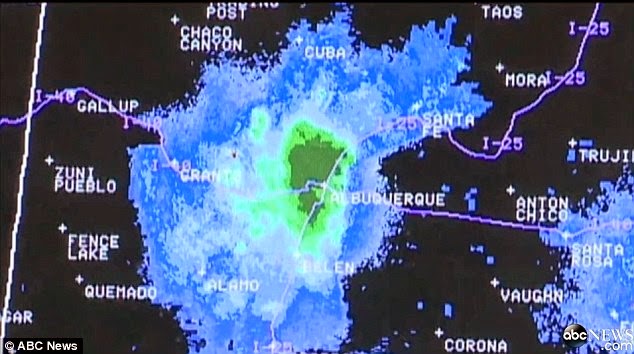 
“Woe to the inhabitants of the earth! God will exhaust His wrath upon them and no one will be able to escape so many afflictions together. Our Lady of La Salette 19 Sept. 1846 (Published by Mélanie 1879)

God will allow the old serpent to cause divisions among those who reign in every society and in every family. Physical and moral agonies will be suffered. God will abandon mankind to itself and will send punishments which will follow one after the other for more than thirty-five years.  Our Lady of La Salette 19 Sept. 1846 (Published by Mélanie 1879)


“The Society of men is on the eve of the most terrible scourges and of gravest events. Mankind must expect to be ruled with an iron rod and to drink from the chalice of the wrath of God. Our Lady of La Salette 19 Sept. 1846 (Published by Mélanie 1879)


Weather officials in Albuquerque say a mysterious presence that showed up on its radar the last few nights has turned out to be of the insect variety. A mysterious green formation showed up on the National Weather Service's radar that looked to be rain. It was no storm, but a swarm of grasshoppers over Albuquerque's West Mesa for the fourth night in a row on Friday. Meteorologist Chuck Jones says the swarm got caught up in winds heading southwest and is being carried as high as 1,000 feet, well above the height of the city's tallest buildings. Jones says the grasshoppers likely hatched weeks ago and are now grown, leading to their ability to trigger radar images. Officials say last year's monsoon season and a drier winter created the ideal environment for the grasshoppers to hatch. There wasn't enough rain to kill the eggs so they all hatched, creating the worst infestation in 20 years. Technicians initially thought their equipment was malfunctioning when they saw several unexplained clusters. 'We really thought that our radar was broke,' Brent Wachter, a forecaster from the National Weather Service told ABC News. 'So we sent our technicians out there a couple of times and we couldn't find anything wrong so we had to call the National Radar Depot in Oklahoma.' Some citizens want the state to spray insecticides for the insects, but John R. Garlisch, extension agent at Bernalillo County Cooperative Extension Service says it will be ineffective. 'It is a nuisance to people because they fly into people’s faces while walking, running, and biking. They are hopping into people’s homes and garages, they splatter the windshield and car grill while driving, and they will eat people’s plants,' Garlisch told ABC News, but that 'this, too, shall pass.' Daily Mail >>>>>>>