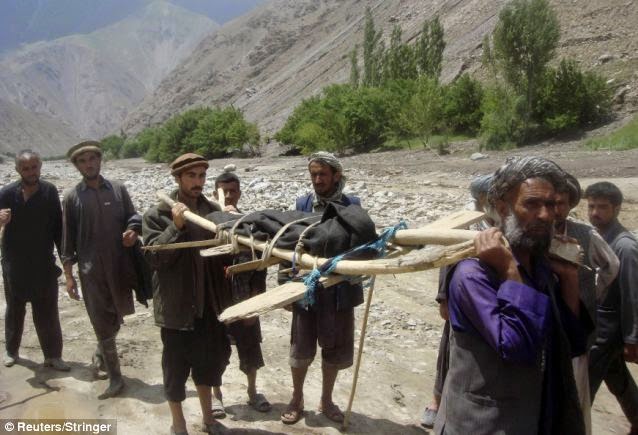 It is believed that 58 people have died and it is feared that the death toll could reach three figures as a remote part of northern Afghanistan is hit by floods. In addition, thousands more have been left homeless. The flooding is the most recent in a series of deadly flash floods, landslides and avalanches in a part of the country that is almost cut off from the rest. Lt Fazel Rahman, the chief of police in the Guzirga i-Nur district of northeastern Baghlan, said that 54 bodies have been recovered so far including the remains of women and children, but many others are still missing. He called for emergency assistance from the central government. 'So far no one has come to help us. People are trying to find their missing family members,' Lt Rahman said, adding that the district's police force was overstretched by the scale of the disaster. A statement from the office of the president Hamid Karzai put the death toll at 58 while other sources placed it higher still. Gen Mohammad Zahir Azimi, a spokesman for the Afghan Defence Ministry, said that two Army helicopters have been sent to the area to provide assistance. Daily Mail Read More>>>>>>