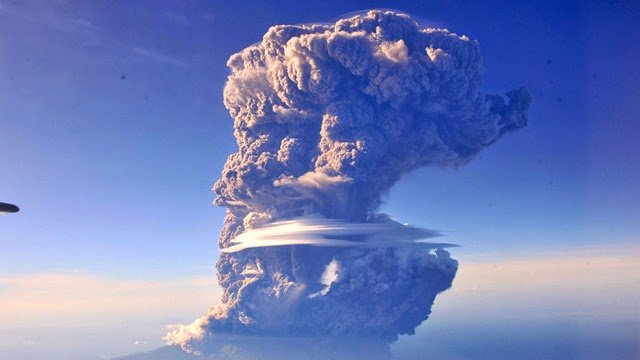 NY POST May 2014 – INDONESIA – Some flights between Australia and Southeast Asia and all domestic flights operating out of Darwin airport in the country’s north were canceled on Saturday after the eruption of Sangeang Api in Indonesia’s south produced a large cloud of ash. International flights to and from Australia to Singapore, East Timor and the Indonesian holiday island of Bali were among those cancelled, including those departing from Australia’s eastern seaboard after an ash cloud from Sangeang Api’s initial eruption on Friday evening tracked across central Australia. “The volcano is undergoing a sustained, rather significant eruption at the moment, so for the last 10 hours we’ve been observing large masses of volcanic ash being generated,” Emile Jansons, manager of the Darwin Volcanic Ash Advisory Centre told Reuters. “At the moment it has slowed down a little bit since its initial big eruption, but nobody has a very good handle on what this volcano is likely to do in the next 24 hours or beyond,” Jansons said, adding that the last eruption of Sangeang Api of this magnitude occurred in 1999.

Based on weather conditions, the current ash cloud tracking across Australia is likely to dissipate before it reaches Australia’s eastern airports and major populations centres, Jansons said. Darwin will continue to be impacted until at least Sunday, he added. All flights into and out of Darwin International Airport were cancelled, spokeswoman Virginia Sanders confirmed. Darwin’s proximity to southeast Asia makes it an important Australian gateway to countries such as Indonesia and East Timor and an important hub for oil and natural gas off Australia’s north. Volcanic ash can be extremely dangerous to aircraft and cause engine failure or engine damage. Qantas Airways Ltd said it had cancelled all flights to and from Darwin on Saturday and its budget unit Jetstar had grounded nine international and domestic flights.

Virgin Australia Holdings cancelled all flights into and out of Darwin and all flights into and out of Bali on Saturday evening, spokeswoman Jacqui Abbott confirmed. “Our team of meteorologists are continuing to monitor the situation, in consultation with the Volcanic Ash Advisory Centre,” the airline said in a statement. Regional carrier Airnorth, which flies many oil and gas workers to work in the region, also cancelled five flights on Saturday and a Tiger Airways Ltd domestic flight was also grounded.