If Mélanie Fabricated The 1879 La Salette Message Then Please Explain....The Mysterious 'Booms' Heard In 64 Locations Around The World This Year? 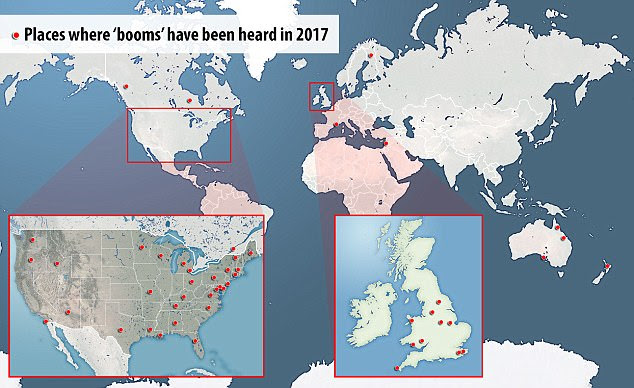 What is causing the mysterious 'booms' heard in 64 locations around the world this year?

WHAT COULD THEY BE?

In 2017 alone, 64 booms have been heard worldwide. The cause of most of the booms remains a mystery, although several explanations have been suggested.

1) Sonic booms A sonic boom is the sound associated with the shock waves created by an object traveling through the air faster than the speed of sound – such as supersonic aircrafts.
Sonic booms generate significant amounts of sound energy, sounding like an explosion to the human ear.
2) Military exercises Many unexplained loud noises can be put down to military training, either at Army or Naval bases or in remote areas used for such exercises.
3) Controlled explosions A controlled explosion is a method for detonating or disabling a suspected explosive device, such as bags left at train stations.
4) Unusual weather Many loud noises link back to unusual weather events, such as electrical storms or thunder storms.
5) Meteors Large meteors passing above Earth often produce shock waves that can be heard as a sonic boom.
6) Sound amplified from aircraft Some have suggested that the sound was due to inversion - a phenomenon that occurs when a layer of warm air sits over a layer of cooler air, magnifying the sound of an aircraft miles away.
7) Aliens Some conspiracy theorists claim that the mysterious booms are noises created by aliens - although there is no evidence to support this.

What Made The Black Death (The Plague) so Deadly?