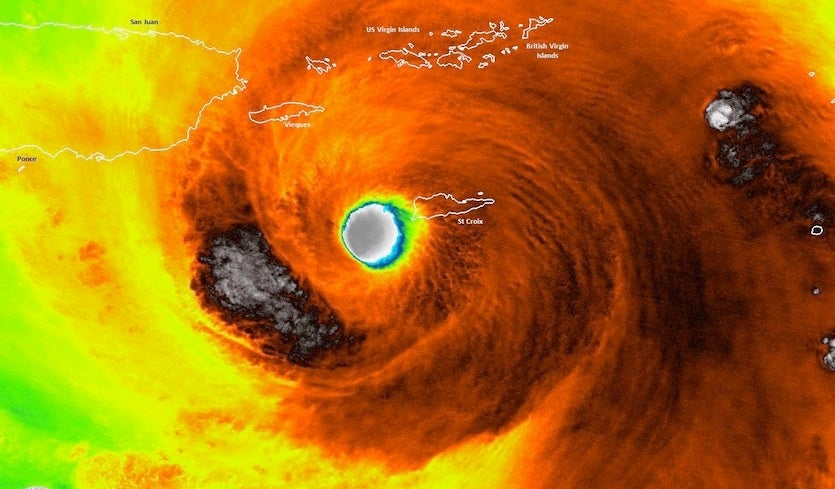 There will be thunderstorms which will shake cities Our Lady of La Salette 19 Sept. 1846 (Published by Mélanie 1879)

Ferocious Hurricane Maria made landfall around 6:15 am EDT Wednesday near Yabucoa in far southeast Puerto Rico as a top-end Category 4 storm, with peak sustained winds estimated at 155 mph.

Maria was the second strongest hurricane ever recorded to hit Puerto Rico, behind only the 1928 San Felipe Segundo hurricane, which killed 328 people on the island and caused catastrophic damage. Puerto Rico’s main island has also been hit by two other Category 4 hurricanes, the 1932 San Ciprian Hurricane, and the 1899 San Ciriaco Hurricane.
Maria did not hit Puerto Rico as a Category 5 hurricane, thanks to an eyewall replacement cycle (ERC) that began on Tuesday night. The storm’s “pinhole” eye, less than 10 miles wide, was supplemented by an outer eyewall that contracted around the smaller one. The process helped lead to the slight weakening of Maria’s top winds, but it also likely broadened its core of winds topping 100 mph. Source

"I protest highly against a different text, which people may dare publish after my death. I protest once more against the very false statements of all those who dare say and write First that I embroidered the Secret; second, against those who state that the Queen Mother did not say to transmit the Secret to all her people." Melanie
at September 20, 2017