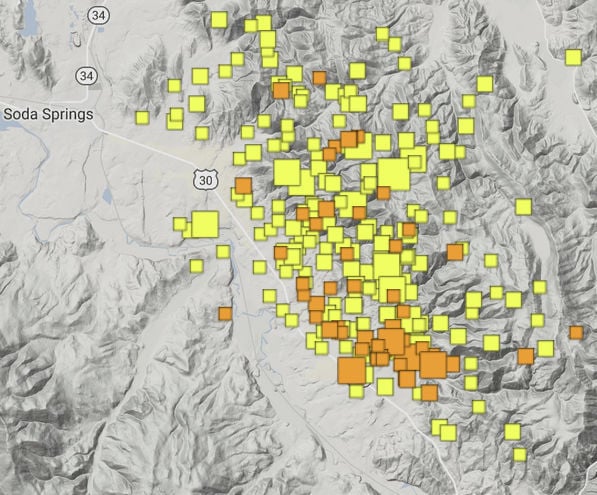 Water and fire will give the earth's globe convulsions and terrible earthquakes which will swallow up mountains, cities, etc....Our Lady of La Salette 19 Sept. 1846 (Published by Mélanie 1879)

204 EARTHQUAKES SINCE SEPT. 2: Over 30 quakes have struck Southeast Idaho so far today as temblor swarm surpasses 200

The earthquake swarm in Southeast Idaho looked like it might be ending or at least slowing down on Thursday and Friday. But then Saturday arrived and by day's end 19 quakes had struck. There have been 34 more temblors so far Sunday, bringing the earthquake total since the swarm began on Sept. 2 to 204 quakes. All of the quakes have occurred in the Caribou County area east, southeast and northeast of Soda Springs. They have been felt throughout Southeast Idaho and as far away as Logan, Ogden and Salt Lake City in northern Utah. Earthquake experts say the worst-case scenario is that the swarm ends with a destructive 7.0 magnitude quake that will destroy buildings and kill people, but the chances of that are slim. Dr. David Pearson, an Idaho State University geologist who studies earthquakes, said scientists who have researched some of the faults in Southeast Idaho have concluded that the 7.0 quake is possible at some point in the region’s future, but the current earthquake swarm is not necessarily an indication that it will occur anytime soon. Source