This is the horrifying moment a bear brutally mauls a tourist after he teased the beast by dangling food in its jaws. Naiphum Promratee, 36, hung bowls of rice into the animal's enclosure using rope while visiting the temple in rural Phetchabun province, Thailand. But he angered the bear who stood on its hind legs and dragged him into the enclosure, knocking him unconscious before tearing off his flesh with its teeth. 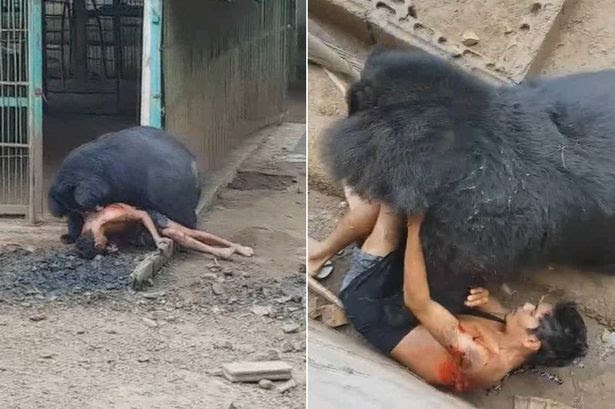 Horrifying footage showed spectators trying in vain to scare away the bear as he mauled Promratee. His friends hit the bear with poles and threw cold water at it, to no avail. The bear continued to bite and scratch Promratee for almost a minute before it started dragging him across the dusty enclosure.  But one of the group ran into the enclosure and battered the bear in its cage with a pole while friends rescued Naiphum. The day before the attack, the head abbot at the Wat Luang Phor Lamai temple said some of the creatures were 'hungry' because they were not being given enough food. Daily Mail>>>>>>