HOUSTON, Aug 29 (Reuters) - Some roads and bridges in Houston are starting to buckle under the impact of catastrophic flooding in parts of the city from Tropical Storm Harvey, a local official said on Tuesday.  Jeff Linder of the Harris County Flood Control District said one bridge had collapsed and that some roads had been damaged by the torrential rains.  Water levels at two reservoirs to the west of the city continue to rise, where more than 3,000 homes have been flooded, Linder added.  The level of Buffalo Bayou, a major drainage system that runs through the city, is holding steady and may not recede for days, said Edmond Russo, deputy engineer with the U.S. Army Corps of Engineers.  Linder said the level of the Houston Ship Channel, which connects to Galveston Bay, was “at levels we’ve never seen before” and slowing the bayou’s ability to drain. (Reporting by Gary McWilliams; Editing by Peter Cooney) Source


PICS OF BRIDGES UNDER WATER 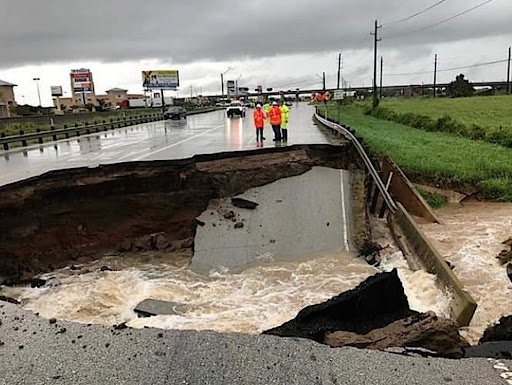