Philippines Flooding Claims 33 Souls! State Of Calamity In Jolo - There Will Be Thunderstorms Which Will Shake Cities, Earthquakes Which Will Swallow Up Countries 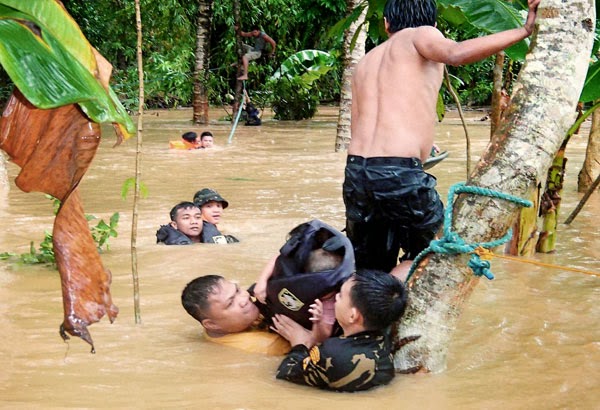 MANILA, Philippines - The number of fatalities left by widespread flooding and landslides due to week-long heavy rains in wide areas of Mindanao has increased to 33, regional disaster officials in Caraga and Davao regions reported yesterday. In the same report, initial damage to infrastructure and agriculture in the two regions has been estimated at P138 million, while a total of 69,718 families or 324,724 people were affected by the widespread flooding and landslides. Office of Civil Defense (OCD) regional director Liza Mazo said in the Caraga region the floods and landslides claimed 15 lives: Surigao del Sur with three recorded fatalities; Agusan del Sur with six, and the island province of Dinagat with six. Mazo said the additional dead were the three earlier reported missing whose bodies were recovered in Agusan del Sur. The victims were swept away by floodwaters when a rescue boat ferrying them capsized in Bunawan River. “A total of 128 houses are damaged due to flooding and landslides, 51 of which are totally damaged from the provinces of Agusan del Sur and Surigao del Sur, while 77 are partially damaged from Bislig City, Agusan del Norte and municipality of Dinagat, Dinagat Island province,” Mazo said. Phil Star Read More>>>>>