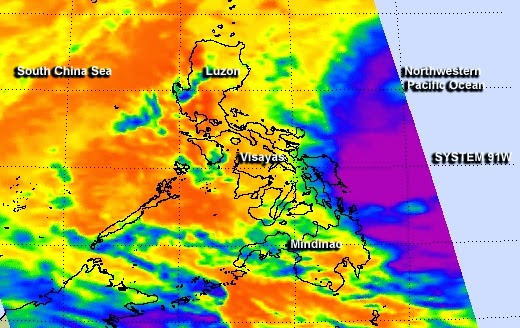 NASA Sees Deadly System 91W Still Soaking Philippines The tropical low pressure area known as System 91W that has been plaguing the central and southern Philippines for the last couple of days continues to bring floods and heavy rainfall today, January 16. NASA's Aqua satellite passed over System 91W and identified powerful thunderstorms with the potential for heavy rainfall, moving back toward the Visayas and Mindanao regions. The Atmospheric Infrared Sounder or AIRS instrument aboard Aqua captured an infrared image of System 91W on Jan. 16 at 05:23 UTC/12:23 a.m. EST that shows high, cold cloud top temperatures, colder than -63F/-52C in the western quadrant of the low pressure area. The storm dropped heavy rains and caused flooding and landslides in the last couple of days in the central region of Visayas and southern region of Mindanao, Philippines, then moved east, back over the Northwestern Pacific Ocean. Today, System 91W is moving in a southwesterly direction and back toward Mindanao. NASA