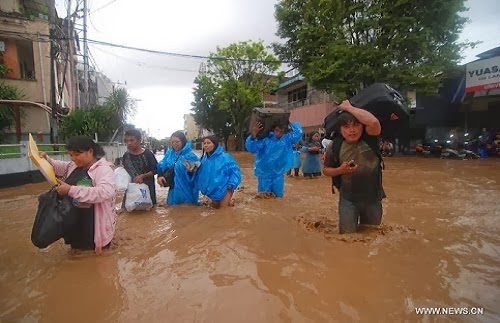 MANADO, Indonesia: At least 16 people have been killed and 40,000 have fled their homes after torrential rain triggered flash floods and landslides on Indonesia's northern Sulawesi island, officials said Thursday. Rivers on the island's northern tip overflowed and burst their banks, sending torrents of water surging through the city of Manado and surrounding areas that swept away poorly-constructed houses and vehicles. People waded through waist-deep water to get to safety, while some took to rubber dinghies to escape the rapidly rising flood waters. Many of those displaced took shelter in government buildings and churches. Rinto Talib said the flood waters surged suddenly into Manado, the main city in North Sulawesi province, causing people to "panic". "I saw at least six cars belonging to my neighbours swept away by the powerful waters," said the 52-year-old, adding it was "the worst flooding that has ever happened in my life". Channel News Asia Read More>>>>>