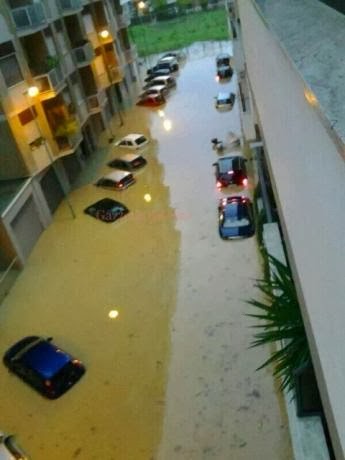 
Gazzetta Del Sud (By Christopher Livesay) Pescara, December 2 - Bad weather continued to hammer Italy Monday, prompting the evacuations of some 1,500 people from the Adriatic city of Pescara where one woman died amid severe-storm alerts throughout central and southern parts of the country. A 57-year-old woman drowned in an underpass that flooded during an extreme storm on the outskirts of Pescara. Anna Maria Mancini was traveling in a car that became trapped Sunday in flood waters on the outskirts of the city on Italy's eastern coast. For several hours, her husband had searched for her without success. Residents near an overflowing reservoir in the city were moved to the city's sporting complex as flood waters rose. The floods come two weeks after 16 people were killed in a violent cyclone on the island of Sardinia, which displaced thousands. Plunging temperatures and incessant rains soon followed throughout mainland Italy. On Sunday in Rome, high winds toppled trees, one of which fell across a highway, killing a motorcyclist. In the south, 200 people were evacuated around Matera, where water washed out roads and large swaths of agriculture. In the southeastern Puglia region, a train conductor and an engineer were in serious condition after their train derailed amid gale winds and pouring rain. Only two passengers, in good condition, were aboard when it went off the tracks near Foggia late Sunday. Just north in Marche, train services along Italy's Adriatic coast were suspended throughout much of the region Monday due to extreme weather conditions. Italy's national rail service announced the suspension of the line running from Ancona to Pescara and from Pescara to Termoli. In Pompeii, rains were believed to be partially responsible for the latest damage at the endangered ruins, which have seen an increased number of threats as winter approaches. On Sunday the wall of an ancient shop crumbled in Via Stabiana and plaster fell from the wall of the House of the Small Fountain (Casa della Fontana Piccola). The Superintendency of Naples and Pompeii said that urgent restoration work would start in mid-December on the upper portion of the wall of the shop next to Via Stabiana in Region VII. The restoration work is part of the already-approved Great Pompeii Project, which aims to secure and restore the site's damaged areas. Of the southeast coast of Italy, rough seas and bad weather kept the coast guard from rescuing 121 migrants adrift until Monday, when all were accounted for in good condition. Rescuers were alerted to the emergency Sunday when an Egyptian immigrant aboard the enfeebled fishing boat made a distress call using a satellite phone. Better weather was expected across Italy on Tuesday.
at December 07, 2013