DOMINICAN REPUBLIC ILLINESS TIMELINE: American Tourists Who Mysteriously Died Or Were Struck Down With Illnesses In The Dominican Republic 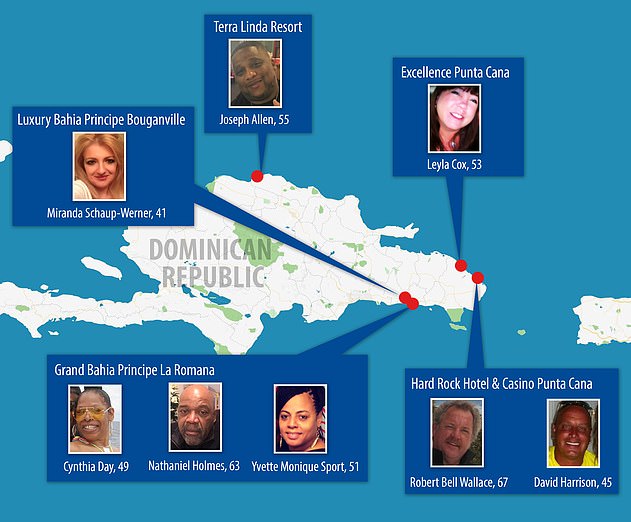 TIMELINE: American tourists who mysteriously died or were struck down with illnesses in the Dominican Republic

June 2018: Yvette Monique Sport, 51, of Glenside, Pennsylvania, dies after drinking from the minibar at the Grand Bahia Príncipe La Romana in Punta Cana, in the Dominican Republic. Family said the previously healthy Sport had the drink, went to sleep and never woke up.

June 2018: Kaylynn Knull, 29, and Tom Schwander, 33, woke up in their hotel room at the Grand Bahia Principe with a pounding headache. They returned to the room later in the day, to find a 'chemical smell'. The couple changed their flights and flew home early.

July 2018: David Harrison, 45, dies while on vacation at the Hard Rock Hotel and Casino in Punta Cana to celebrate his wedding anniversary. He woke up struggling to breathe and covered in sweat. He died that same day. His widow said he'd visited the doctor before the trip who'd given him a clean bill of health.

October, 2018: Awilda Montes, 43, of New York, claims she drank a bottle of soda from the minibar at the Grand Bahia Principe Resort in La Romana that 'turned out to be bleach.' She survived but suffered chemical burns.

May 25: Miranda Schaup-Werner, 41, of Pennsylvannia, dies within hours of consuming a drink from a resort minibar at the Luxury Bahia Principe Bouganville.

May 30: Day and Holmes are found dead in their rooms at the Grand Bahia Principe Hotel, La Romana.

June 10: Leyla Cox, 53, of Staten Island, New York, is found dead in her hotel room at Excellence Resorts in Punta Cana. The U.S. Embassy in Santo Domingo informed her family that she died of a heart attack, but her son, William Cox, says he is suspicious.

June 13: Joseph Allen, 55, of Avenel, New Jersey, was found dead in his hotel room at the Terra Linda hotel in Sosua.

June 15: Mark Hurlbut Jr. told AZFamily.com his father, Mark Hurlbut Sr., from Surprise, Arizona, died exactly a year ago on June 15, 2018, in Punta Cana. A coroner listed his death there as a heart attack. However in light of the recent spate of tourist deaths Hurlbut Jr is now questioning how his dad died. He did not say which resort his father was staying at but he said his dad was 'found foaming green stuff' when he died. Source