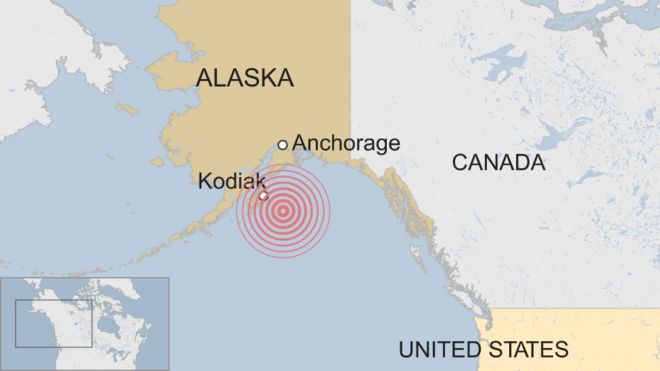 
The quake hit 280km (173 miles) south-east of Kodiak, at a depth of 25km, at 00:31 local time (09:31 GMT), the US Geological Survey said.  The US National Weather Service (NWS) said tsunami waves of less than 1ft (0.3m) had been confirmed.  A lower-level advisory briefly remained in effect for south Alaska and the peninsula, before being lifted.  Waves between 0.4ft and 0.7ft had been recorded in Kodiak, Seward, Old Harbor, Sitka and Yakutat, the NWS said.  It said that tsunami waves of less than 1ft were expected in the town of Homer.  The latest advisory would be the last handed out, the service said - but still advised residents not to return to "hazard zones until local emergency officials indicate it is safe to do so".  Residents had earlier been told to seek high ground as sirens in several towns blared at around 01:00 on Tuesday. Four hours later, the all-clear was given.  Kodiak City Manager Mike Tvenge thanked residents for their orderly evacuations and told them to return home safely. Mayor Pat Branson said the warning centre had done an "excellent job".  Kodiak school district cancelled all classes on Tuesday because of the warning, telling students to remain home. Source

"I protest highly against a different text, which people may dare publish after my death. I protest once more against the very false statements of all those who dare say and write First that I embroidered the Secret; second, against those who state that the Queen Mother did not say to transmit the Secret to all her people." Melanie
at January 23, 2018