(Vatican Radio) The Prefect of the Dicastery for Promoting Integral Human Development, Cardinal Peter Turkson, has issued the full text of his prepared statement to the United Nations Conference to Support the Implementation of the 14th Sustainable Development Goal, which deals with Conserving and Sustainably Using the Oceans, Seas and Marine Resources. Please find the full text of Cardinal Turkson’s statement, below…

Prefect of the Dicastery for Promoting Integral Human Development, Head of the Delegation of the Holy See to the United Nations Conference to Support the Implementation of SDG 14:Conserve and Sustainably Use the Oceans, Seas and Marine Resources for Sustainable Development

Last month the Holy See launched a new initiative called “Laudato Si’ Challenge,” in a roll out that included the President of the United Nations General Assembly and prominent business and political leaders from across the globe. The goal of this project is to highlight the importance of environmental concerns in making business decisions, planning projects, and influencing law and policy. The Holy See is committed to continuing and strengthening these efforts.

Achieving Sustainable Development Goal 14 is in everyone’s interest, because the gravity of the issues confronting our oceans involves the very existence of mankind. Besides providing food and raw materials, the oceans provide various essential environmental benefits such as air purification, a significant role in the global carbon cycle, climate regulation, waste management, the maintenance of food chains and habitats that are critical to life on earth.

Pope Francis, in his Encyclical Letter “Laudato Si’, On Care for Our Common Home,” appealed to everyone to alter the trajectory of environmental degradation by changing patterns of consumption and lifestyles harmful to the environment. Careless or selfish behavior in our use of resources and in our interaction with the environment must be addressed at all levels, from individual behavior to national policies and international multilateral agreements.

To reverse the negative impacts on marine resources and to strengthen the long-term conservation and sustainable use of our oceans, we must integrate ethical considerations in our scientific approaches to environmental issues, because environmental deterioration and human and ethical degradation are closely linked. The environment cannot be regarded as something separate from ourselves or as a mere setting in which we live. We are part of it, included in it and in constant interaction with it.

Consequently, a crisis of the environment necessarily means a moment of truth for all of us. As Pope Francis reminded us, “[W]e are not faced with two separate crises, one environmental and the other social, but rather one complex crisis that is both social and environmental.”[1] This compound reality, therefore, demands an integrated approach that simultaneously takes care of the environment, combats poverty and exclusion, assures the collective enjoyment by all of the common good, and fosters intergenerational solidarity. 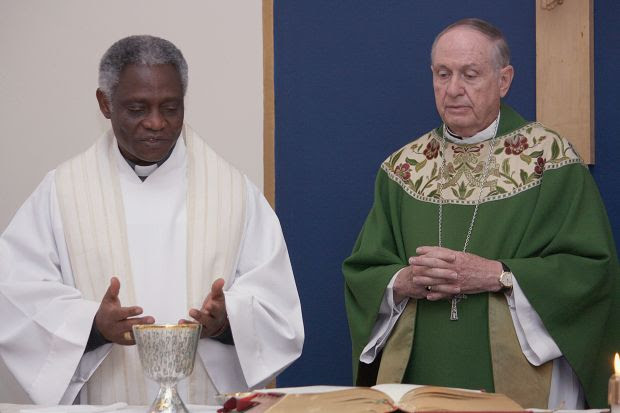 An ethical approach means, above all, taking seriously our responsibility to care for these precious natural resources and to protect those persons, especially the poor and vulnerable, who depend on them for their daily subsistence. Without an approach informed by ethical considerations, we are left with a system where “some are concerned only with financial gain, and others with holding on to or increasing their power,” resulting in “conflicts or spurious agreements where the last thing either party is concerned about is caring for the environment and protecting those who are most vulnerable”.[2]

An ethical approach must focus not just on rights but also on obligations. Much of the decline in the health of oceans is a result of emphasizing rights and autonomies to the detriment of personal and national responsibilities. The lack of adequate legal and regulatory frameworks and the failure to implement existing laws, allowing many to take advantage of oversights and gaps, exacerbate this overemphasis on rights at the expense of obligations. Care for our common home, however, is and will always be a moral imperative.

Oceans, and all of us who depend on them, would in particular benefit from this ethical approach. For many years, the health of oceans and seas was not adequately considered, as oceans were thought to be so vast as to not be affected by human activities. We have taken for granted our liberties to use them, enjoying the freedom of navigation, of fishing, of laying cables, and of scientific research, but we have not sufficiently underlined our responsibilities in their proper use. This is evident in the fact that, other than provisions regarding general care of the environment or pollution, there is no global agreement or institutional body that specifically addresses care and protection of the resources of the oceans. Such an agreement is particularly urgent as ocean resources are more and more intensely harvested. Oceans have value beyond that of fishing and navigation: they are also a vast source of renewable energy and biological and mineral wealth, including those used by the pharmaceutical and cosmetics industries.

An ethical approach inspires solidarity with future generations. As Pope Francis reminded us, “[I]ntergenerational solidarity is not optional, but rather a basic question of justice, since the world we have received also belongs to those who will follow us.”[3] Thus, while our care for our oceans immediately benefits us, it is also a gift to future generations, sparing them from paying the extremely high price of environmental deterioration and allowing them to enjoy its beauty, wonder, and manifold endowment.

In many religious and cultural traditions, water is a symbol of cleansing, renewal and rebirth. It is also, in this sense, that the Holy See welcomes this fresh beginning of a renewed cooperation and coordination of global efforts to conserve and sustainably use our oceans, seas and marine resources.