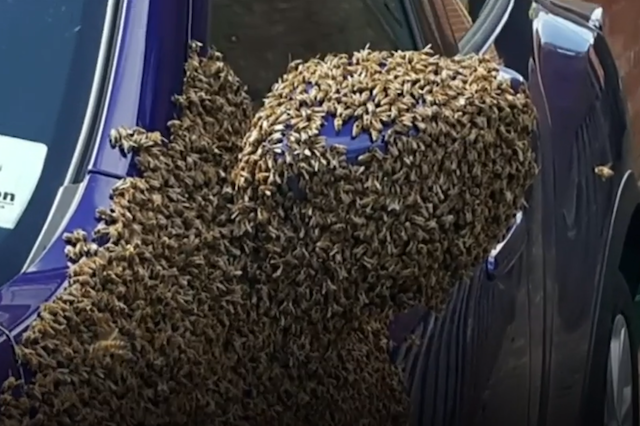 This is the astonishing moment a woman in Hull came home to find 20,000 bees all over her car. The blue Nissan Juke had been parked on her driveway while she was out, when a neighbour phoned and reported that a swarm of bees had descended upon the car. On her return home, Shirley Taylor found an astonishing sight - her car appeared to be totally covered in them. Speaking to BBC Breakfast, Taylor said: "There were thousands all over the place and I have been stung and my daughter and granddaughter also got stung. "It is like Nightmare on Watt Street." The incident initially took place on Sunday June 11, but Chris Coulson, chairman of the Beverley Beekeepers' Association, has so far been unsuccessful in luring the swarm out of their new Nissan-shaped hive. Coulson said: "These cars have all kind of recesses and the bees seem to have gone into every one they could find. "We are trying to make them fly. In the box on top of the car we have young bees, some eggs and things like that and the bees in the car will hopefully try to cover those to make sure they don't die." Source