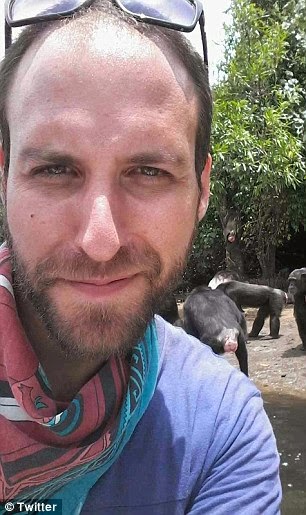 A cameraman working for NBC News in Liberia has become the fourth American to contract the deadly Ebola virus. Freelance journalist Ashoka Mukpo, 33, is being flown privately back to the U.S. for treatment, while the network’s chief medical editor and correspondent Dr. Nancy Snyderman and the rest of her team are also returning and will be placed in quarantine for 21 days. Neither Snyderman nor the other members of her team are currently displaying any signs of the disease, said NBC. The infected journalist was only hired this week to be a second cameraman for Snyderman, who has been reporting on the continuing spread of the deadly virus in the country's capital Monrovia. Mukpo, originally from Providence, Rhode Island, had been doing human rights work in West Africa for 'several years before' returning to Liberia when the Ebola outbreak began, his father, Mitchell Levy, told ABC News. He confirmed his son had been diagnosed and said: 'Ashoka is being evacuated to the USA where he will receive the best possible treatment. The doctors are optimistic about his prognosis.' The cameraman took to Facebook on a number of occasions while in West Africa, describing the desperation of the situation as it unfolded. Daily Mail Read More>>>>>