A CHINESE media giant has sparked conspiracy theories after appearing to publish the coronavirus death toll as more than 24,589 - before changing it to 304.

Tencent, the multinational tech company that developed WeChat, reportedly listed figures for the coronavirus on Saturday showing 154,023 were infected.

Tencent's webpage titled 'Epidemic Situation Tracker' was quickly updated to reflect the official figures of 14,446 infected and 304 dead at the time, according to Taiwan News.

The death toll has since risen to 563 in China, with 28,018 cases confirmed in the country.

Tencent is yet to issue any statement on the matter.

This follows speculation that the Communist Party in Beijing may be hiding the true extent of the damage caused by the deadly virus.

Pincong, a Chinese forum with a focus on censored topics, commented on the Tencent figures: "Don't know if this is true, but it is certain that the real figures are higher [than the official ones].

"Because the majority of sufferers in Wuhan have sent their pleadings for help through WeChat, accusing hospitals of refusing to admit them after they had been infected.

"[Therefore], these deaths were not counted into the epidemic statistics. This is enough to show how serious the real situation is."

However, some comments under the Pingcong post suggested that the viral screen grabs could have been digitally altered. Source 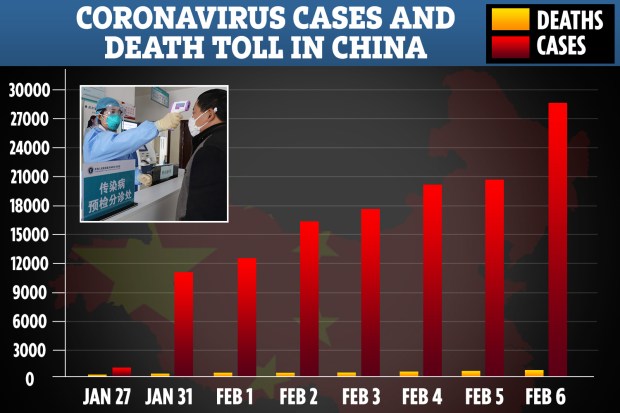