Now 108 Souls Missing/Dead From Massive Washington Mudslide! At The First Blow Of His Thundering Sword, The Mountains And All Nature Will Tremble In Terror! 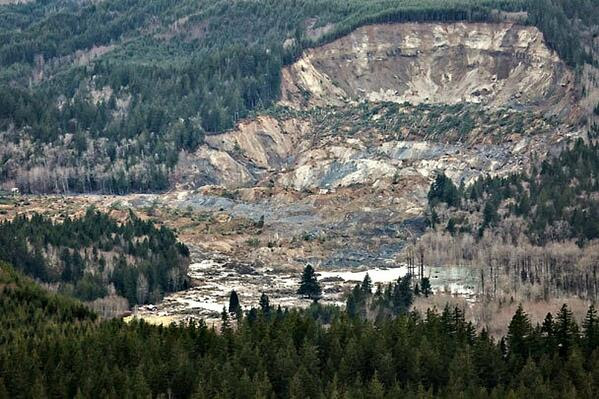 
24 Mar. 2014 ARLINGTON, Wash. (AP) — There are 108 names on the list of people who’ve been reported missing or unaccounted for in the weekend mudslide in Washington state, authorities said Monday. Snohomish County emergency management director John Pennington said that’s the consolidated list from various sources that authorities are working from, and it doesn’t mean there are that many injuries or fatalities. “It’s a soft 108,” Pennington said at a news conference. Among the possible missing are construction workers coming into the neighborhood and people just driving by. Pennington added the slide occurred on a Saturday morning, when more people were likely to be home. An overnight search turned up no additional survivors or fatalities. “The situation is very grim,” Snohomish County Fire District 21 Chief Travis Hots said Monday morning. He stressed that authorities are still in rescue mode and are holding out hope. But he noted: “We have not found anyone alive on this pile since Saturday.” At least eight people were killed in the 1-square-mile slide that hit in a rural area about 55 miles northeast of Seattle. Several people also were critically injured, and about 30 homes were destroyed. Of the 49 structures in the neighborhood hit by the slide, authorities believe at least 25 were occupied full-time.