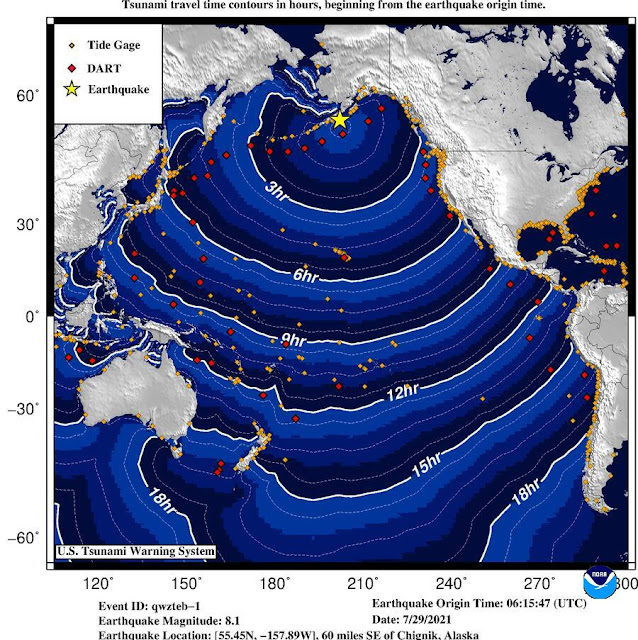 Earthquake recorded off Alaska raising tsunami concerns
The Tsunami Warning Center says it's 'assessing the situation' An 8.2 magnitude earthquake was recorded late Wednesday off of Alaska’s Aleutian Island chain, which prompted a tsunami warning and evacuations in Kodiak, police told Fox News. A tsunami watch had been issued for Hawaii but was later canceled.A reporter in Alaska tweeted that tsunami sirens are also blaring in Kodiak. A police spokeswoman told Fox News that authorities are urging residents to evacuate due to the tsunami threat. The National Weather Service in Los Angeles said the Tsunami Warning Center in Palmer, Alaska, is "evaluating the potential for a tsunami for the west coast from California to Washington State." New Zealand’s National Emergency Management Agency tweeted that it is also assessing the situation and said if a tsunami is generated, it will likely take about 12 hours to reach the island. The U.S. Geological Survey said the quake hit 56 miles east southeast of Perryville, Alaska. Two other earthquakes with preliminary magnitudes of 6.2 and 5.6 occurred in the same area within a half hour of the first one, the U.S. Geological Survey reported. Source
****
PROPHECY OF MELANIE ON TWO POPES:
"I didn't see, I don't see any Great Pope or Great Monarch before an extremely great tribulation, horrifying, terrible and general for all Christendom. But before that time, twice there will be a short lived peace; TWO shaky, servile, doubtful popes" Mélanie