Our Lady Of La Salette On 10,000 Pigeons VANISH ....It Will Rain With A Fearful Hail Of Animals.

It will rain with a fearful hail of animals. Our Lady of La Salette 19 Sept. 1846 (Published by Mélanie 1879)
"Woe to the inhabitants of the earth. There will be bloody wars, and famines; plagues and contagious diseases; there will be frightful showers of animals; thunders which will demolish cities; earthquakes which will engulf countries; voices will be heard in the air; men will beat their heads against the walls; they will call on death, yet death will constitute their torment; blood will flow on all sides. Who could overcome, if God doesn't shorten the time of trial? At the blood, tears and prayers of the righteous, God will relent; Enoch and Elias will be put to death; pagan Rome will disappear; the fire of Heaven will fall and consume three cities; the whole universe will be struck with terror, and many will allow themselves to be seduced because they didn't adore the true Christ living in their midst. It is time; the sun is darkening; Faith alone will survive. Our Lady of La Salette 19 Sept. 1846 (Published by Mélanie 1879)
"Nature begs vengeance on account of men, and she shudders with dread, awaiting what must happen to the crime-stained earth. Tremble, earth, and you who profess to serve Jesus Christ, while interiorly you adore yourselves, tremble; for God will hand you over to His enemy, because the holy places are in a state of corruption; many convents are no longer houses of God, but pastures for Asmodeus and his own." Our Lady of La Salette 19 Sept. 1846 (Published by Mélanie 1879)
“At the first blow of His thundering sword, the mountains and all Nature will tremble in terror, for the disorders and crimes of men have pierced the vault of the heavens. Paris will burn and Marseilles will be engulfed. Several cities will be shaken down and swallowed up by earthquakes. People will believe that all is lost. Nothing will be seen but murder, nothing will be heard but the clash of arms and blasphemy. Our Lady of La Salette 19 Sept. 1846 (Published by Mélanie 1879) 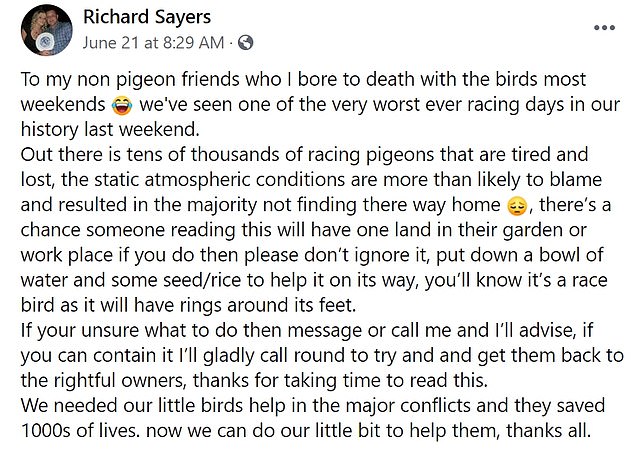 10,000 pigeons VANISH during 170-mile race from Peterborough to North Yorkshire - as breeders fear birds were confused by 'solar storm above clouds'
Anxious pigeon fanciers have appealed for help after up to 10,000 birds vanished during a race in Peterborough.  One breeder described the puzzling event as 'one of the very worst racing days in our history.'  The birds, many based in the North East of England, became lost in a race from Peterborough at the weekend. Their owners believe a 'solar storm above the clouds' may have disorientated the birds and thrown off their normally infallible homing instinct.  Around 9,000 birds from the North East alone were in the race and it is estimated that 40% of them didn't return home.  The full number from around the country hasn't yet been calculated but is thought to be between 5,000 and 10,000 missing.  Richard Sayers, based in Skinningrove, North Yorkshire, 170 miles from the race, says 300 birds are missing from lofts in the fishing village, where pigeon racing is a way of life to many.  Source
In case you never heard of Our Lady of La Salette or Mélanie here have a look....
PROPHECY OF MELANIE ON TWO POPES:
"I didn't see, I don't see any Great Pope or Great Monarch before an extremely great tribulation, horrifying, terrible and general for all Christendom. But before that time, twice there will be a short lived peace; TWO shaky, servile, doubtful popes" Mélanie

"I protest highly against a different text, which people may dare publish after my death. I protest once more against the very false statements of all those who dare say and write First that I embroidered the Secret; second, against those who state that the Queen Mother did not say to transmit the Secret to all her people." Mélanie
at June 29, 2021