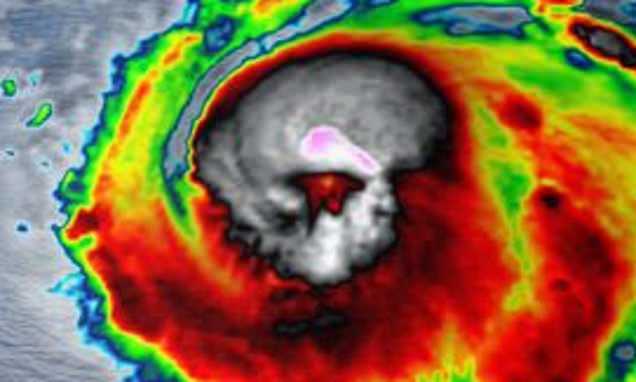 PANAMA CITY, Fla. (AP) — Gaining fury with every passing hour, Hurricane Michael began pounding the Florida Panhandle with sideways-blown rain and crashing waves Wednesday as it closed in on the coastline with potentially catastrophic winds of 150 mph. It was the most powerful storm on record to menace the roughly 200-mile stretch of fishing towns, military bases and spring-break beaches. “I’ve had to take antacids I’m so sick to my stomach today because of this impending catastrophe,” National Hurricane Center scientist Eric Blake tweeted as the storm — supercharged by the Gulf of Mexico’s abnormally warm, 84-degree water — grew more scary. The brute quickly sprang from a weekend tropical depression, becoming a furious Category 4 by early Wednesday. Less than a day earlier, Michael was a Category 2. “The time to evacuate has come and gone ... SEEK REFUGE IMMEDIATELY,” Florida Gov. Rick Scott tweeted, while the sheriff in Panama City’s Bay County issued a shelter-in-place order before dawn. Source