There Will Be Thunderstorms Which Will Shake Cities! Monsoon Floods Kill Over 400 Souls India & Pakistan 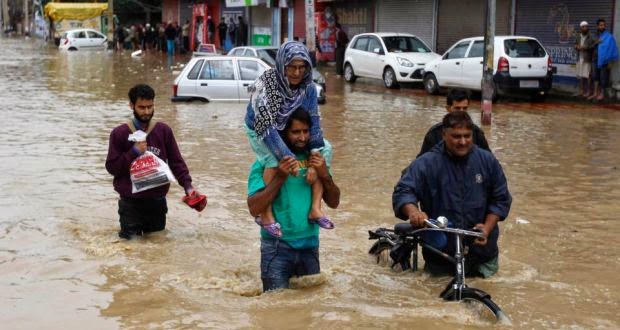 NEW DELHI — Relief operations struggled on Monday in the Indian-administered portion of Kashmir and in parts of Pakistan where six days of rain and flooding have left hundreds of people dead. On the Pakistan side of the border, Ahmed Kamal, a spokesman for the National Disaster Management Authority, said more than 190 people had been killed — more than 60 in the Pakistani-administered part of Kashmir and about 130 in Punjab Province. Severe damage was caused by the Jhelum and Chenab Rivers, which swelled after heavy monsoon rainfall last week, flooding hundreds of villages adjoining the rivers. Thousands of people were displaced, most of them living in tents and waiting for medical supplies and food. The Pakistani military was overseeing relief efforts. On Monday, 970 people were rescued in Punjab, according to a spokesman. Continue reading the main story RELATED COVERAGE Kashmiri residents fled to higher ground during floods on the outskirts of Srinagar on Saturday. “We did not expect this kind of flood,” NY Times Read More>>>>