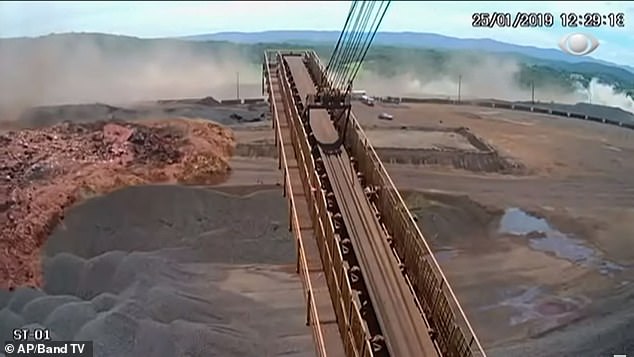 A newly released video shows the devastating power of a mudslide in Brazil at the moment a mining dam burst. The dam burst on January 25 in the Brazilian state of Minas Gerais, killing 115. At least 248 people are still missing. The video, which appears to have been shot from a crane, shows the mud flowing over a mining operation towards vehicles as they desperately try to escape. The burst tailings dam at the Corrego do Feijao mine last Friday has ignited intense public anger against mining company Vale. Around 2,000 people gathered in Belo Horizonte, capital of the mining-intensive state of Minas Gerais which was home to both disasters, to protest against Vale, with some saying its top executives should be jailed. 'I lost three of my students,' said Aparecida Moreira, a teacher at a local law school. 'They are dead, and we don't know where their bodies are.' There were also demands for a congressional investigation. The disaster poses a headache for the new government of far-right President Jair Bolsonaro, whose new business-friendly administration must juggle public anger over the tragedy and its own desire to ease mining and environmental regulations to kick-start growth. On Friday, a week after the dam collapse, dozens paid homage Friday to the victims. A ceremony was held at the site of the disaster around 1pm local time, the hour at which the dam breached on January 25, unleashing a destructive torrent of reddish-brown mining waste. Source