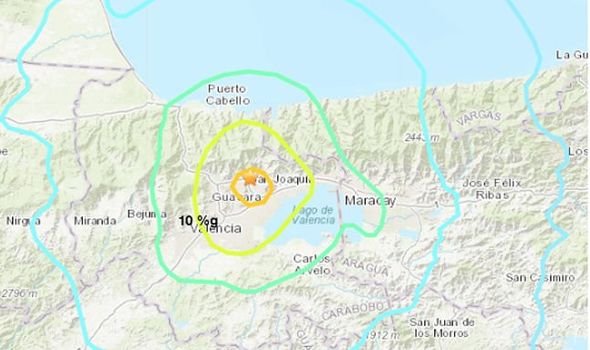 Venezuela earthquake: Carabobo ROCKED by 5.6 quake - ‘It was so strong’

The 5.6 quake struck at 4.59am local time (8.59am GMT), at a depth of 6.2 miles. Residents left witness reports on earthquake-tracking website CSEM-EMSC. One said: “Very strong in Valencia, Carabobo.” Another said: “It was so strong the movement of my bed woke me up.” A third said: “It vibrated the whole house.”  The US Geological Society (USGS) has estimated a relatively high likelihood of fatalities.  Their initial, automated report estimated a 44 percent chance at least one life would be lost, a 27 percent chance the death count could reach 10, and a five percent chance it could top 100. There is a 24 percent chance no lives will be lost.  The USGS also said it was more than likely between 10 and 100 million dollars in damage has been caused, at 55 percent. The USGS said: “Overall, the population in this region resides in structures that are vulnerable to earthquake shaking, though resistant structures exist.  “The predominant vulnerable building types are wood and adobe block construction.”  This morning's quake was followed by a slightly weaker and deeper 5.1 magnitude earthquake Source