Galapagos volcano eruption MAP: Where are the Galapagos Islands? What volcano has erupted?

LA CUMBRE volcano on Fernandina Island in the Galapagos erupted violently on Saturday, causing a large plume of smoke, ash, and flows of magma across the island. But where are the Galapagos Islands?  Erupting between 11.00am and 11.15am (6.00pm and 6.15pm BST) on Saturday, June 16, La Cumbre spewed clouds of gas and smoke into the air.   La Cumber measures 4,852 feet high and is the most active volcano on the Galapagos Islands.  Similar to Hawaii’s Kilauea, La Cumbre is a shield volcano, made up of almost entirely lava flows.  Before the eruption, nine earthquakes had shaken Fernandina Island ranging from 2.5 magnitudes to 4.1 magnitudes according to the Geophysical Institute of the National Polytechnic School. 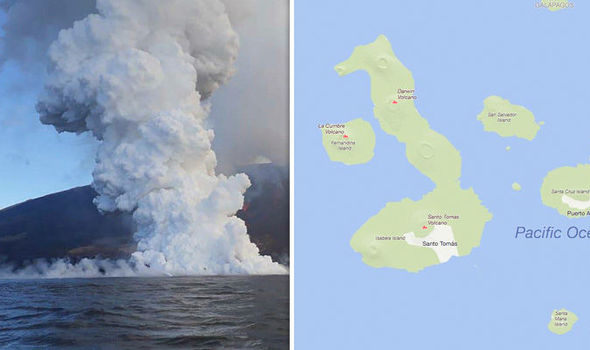 The last time La Cumbre, (also known as Fernandina volcano) erupted was September 2017, which occurred after eight years of superficial calm.  Galapagos Park Director Jorge Carrion released a statement confirming there are no human settlements in the area where the eruption has taken place.   There is also no plan to evacuate animals as what has occurred has been a natural event says, Director Carrion.  He said: "There are some species that could be affected, however, being a flow (of lava) that is in only one direction, on only one side of the island, the possible impacts that there would be would not have a significant impact on biodiversity.  Source