“Evil books will be abundant on earth and the sprits of darkness will spread everywhere a universal slackening of all that concerns the service of God. They will have great power over Nature: there will be churches built to serve these spirits. People will be transported from one place to another by these evil spirits, even priests, for they will not have been guided by the good spirit of the Gospel which is a spirit of humility, charity and zeal for the glory of God. On occasions, the dead and the righteous will be brought back to life. Our Lady of La Salette 19 Sept. 1846 (Published by Mélanie 1879)

Worst than first reported - over 400 now confirmed dead in 7.8 earthquake that struck off the coast of Ecuador:

Ecuador brings out its dead as death toll from devastating 7.8 earthquake hits 272 - and government reveals more than 150 prisoners are on loose after fleeing jail

Aid began to flow in Sunday to areas devastated by Ecuador's strongest earthquake in decades and the death toll continued to rise as people left homeless hunkered down for another night outside in the dark. Officials said the quake killed at least 272 people and injured more than 2,500 along Ecuador's coast. Vice President Jorge Glas said the toll was likely to rise because a large number of people remained unaccounted for, though he declined to say how many. Much damage was reported in the cities of Manta, Portoviejo and Guayaquil, which are all several hundred miles from the epicenter of the quake that struck shortly after nightfall Saturday. Daily Mail Read More>>>>>> 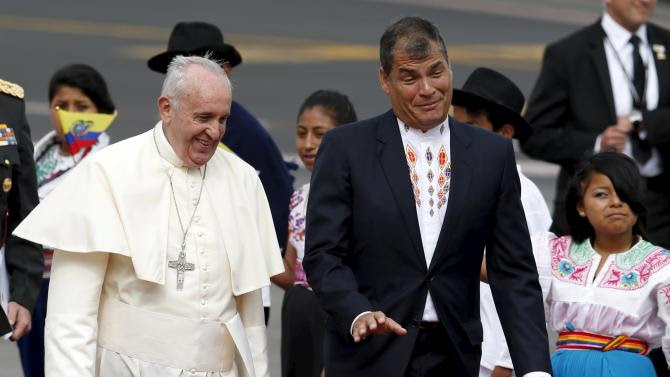 
As has been asked before - how many times does pope Francis have to send out condolences during his pontificate before he catches on that Pope Francis is the instrumental cause of all the death and destruction?


Pope Francis remembers the victims of the earthquake in Ecuador

After the general audience, as is tradition, the Pope greets the pilgrims from Spain and Latin America in Spanish. Today was a special case, he wanted to add a few words of remembrance for the victims of the devastating earthquake in Ecuador that killed more than 400 people.

"And in this language that binds us to Spain and Latin America; I want to express to our brothers in Ecuador our closeness and our prayers in this time of grief. Thank you.” POPE FRANCIS