The priests, ministers of my Son, the priests, by their wicked lives, by their irreverence and their impiety in the celebration of the holy mysteries, by their love of money, their love of honors and pleasures, and the priests have become cesspools of impurity. Yes, the priests are asking vengeance, and vengeance is hanging over their heads. Woe to the priests and to those dedicated to God who by their unfaithfulness and their wicked lives are crucifying my Son again! The sins of those dedicated to God cry out towards Heaven and call for vengeance, and now vengeance is at their door, for there is no one left to beg mercy and forgiveness for the people. There are no more generous souls; there is no one left worthy of offering a stainless sacrifice to the Eternal for the sake of the world. Our Lady of La Salette 19 Sept. 1846 (Published by Mélanie 1879)

Earthquake struck off the coast of Chile - causing a Tsunami. This was the seventh day (WEDNESDAY) of the doom novena leading up to Pope Francis' visit to the Americas on the Feast day of Our Lady of La Salette 19 Sept. 2015!

Strong quake shakes Chile capital, causing buildings to sway
SANTIAGO, Chile (AP) — A powerful magnitude-8.3 earthquake hit off Chile's northern coast Wednesday night, causing buildings to sway in Santiago and other cities and sending people running into the streets. At least three aftershocks above magnitude-6 and other strong shakes rattled the region as tsunami alarms sounded in the port of Valparaiso in the first major quake since a powerful quake and tsunami killed hundreds in 2010 and leveled part of a southern Chilean city. Officials ordered people to evacuate low-lying areas along the 2,400 miles (3,900 kilometers) of Chile's Pacific shore, from Puerto Aysen in the south to Arica in the north. Cars streamed inland carrying people to higher ground. Read More>>>>>>

Chile earthquake: 8.3-magnitude quake strikes off coast
(CNN) A powerful 8.3-magnitude earthquake struck off Chile's coast on Wednesday, according to a preliminary assessment from the U.S. Geological Survey. The quake's epicenter was about 54 kilometers (34 miles) west of Illapel, Chile, USGS said. It occurred around 7:54 p.m. (6:45 p.m. ET) and had a depth of 33 kilometers (20.5 miles). Chile's national emergency agency issued a tsunami alert, ordering evacuations in coastal areas from Arica to Puerto Aysen. There were reports of damages to homes in Illapel, Interior Minister Jorge Burgos told reporters. Ricardo Toro, the director of Chile's emergency agency, told reporters that there were no reports of major damage or deaths. "Widespread hazardous tsunami waves are possible" along the coast of Chile and Peru, the Pacific Tsunami Warning Center said, and a tsunami watch is in effect for Hawaii. Read More>>>>> 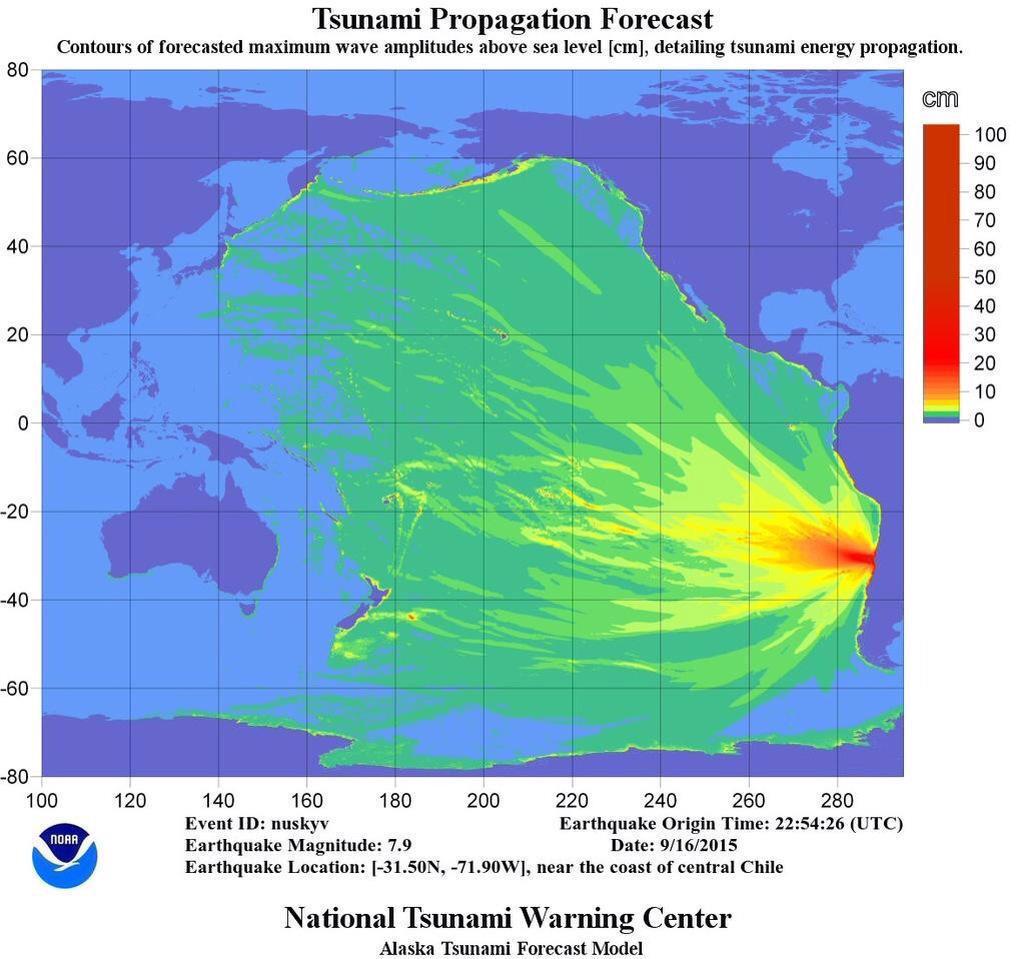 Death count for possible Tsunami -----? will find out tomorrow.