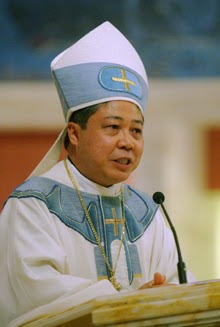 Who is to blame for the increased natural disasters that the world has been punished with these last five years or so?

1. Corporate America & Modern technology?
2. Sins of the priests and their failure to intercede on the behalf of us sinners?

Our Lady at La Salette said that the sins of the priests are to blame and the stripped and barren new mass is to blame as well.


The priests, ministers of my Son, the priests, by their wicked lives, by their irreverence and their impiety in the celebration of the holy mysteries, by their love of money, their love of honors and pleasures, and the priests have become cesspools of impurity. Yes, the priests are asking vengeance, and vengeance is hanging over their heads. Woe to the priests and to those dedicated to God who by their unfaithfulness and their wicked lives are crucifying my Son again! The sins of those dedicated to God cry out towards Heaven and call for vengeance, and now vengeance is at their door, for there is no one left to beg mercy and forgiveness for the people. There are no more generous souls; there is no one left worthy of offering a stainless sacrifice to the Eternal for the sake of the world. Our Lady of La Salette 19 Sept. 1846 (Published by Mélanie 1879)

“Everywhere there will be extraordinary wonders, as true faith has faded and false light brightens the people. Woe to the Princes of the Church who think only of piling riches upon riches to protect their authority and dominate with pride. Our Lady of La Salette 19 Sept. 1846 (Published by Mélanie 1879)

Don't worry if you haven't been paying attention to the punishments that were sent these last five years or so - because there will be over 35 years of punishments sent from on high.

I don't have to worry that I don't convince many as possible that the punishments sent from on high are due to the sins of the priests and the irreverent stripped and barren new mass - because like I said there will be over 35 years of hell coming your way - if not this year or the next but maybe ten years from now or maybe twenty - either way all of you will come around to my way of thinking and start blaming the clergy and the stripped and barren new mass and demand JUSTICE.

I just have to follow the example of Jonah by sitting under my IVY over against the city to watch and wait.....

Funny how none of you see this..

Unlike Jonah, I will not be disappointed....

Here the news item of the deflection:

The Holy See at the United Nations: climate change is not only an environmental problem, but also a matter of justice

“While the impact of climate change is felt globally, developed and technologically advanced countries have greater capacity to adapt and mitigate the adverse effects, whereas developing and poor nations remain particularly vulnerable”, he said. “During the Climate Summit on September 23 and on many other occasions, we have heard the urgent pleas of Small Island States that climate change is an existential threat to them. This is paradoxical and unjust, given that the primary factors of climate change, like high consumption and high-quantity greenhouse gas emissions, characterize highly industrialised societies. That is why the Holy See believes that climate change is not only an environmental question; it is also a question of justice and a moral imperative”.

“It is a matter of justice to help poor and vulnerable people suffering the most from causes largely not of their making and beyond their control”, emphasised the archbishop. “One concrete step would be to make available to them the best in adaptation and mitigation technology. And now all eyes are already turned to the Twenty-first Conference of Parties to the United Nations Framework Convention on Climate Change and the Eleventh Meeting of the Parties to the Kyoto Protocol, which will take place in Paris in December 2015. There, the poor and the rich – indeed, all of us – will be winners if we can reach agreement on a post-2020 international regime, in which all the nations of the world, including the biggest emitters of greenhouse gases, bind themselves to a universal agreement on climate”.

“It is along this line that my delegation sees a relevance of the term 'responsibility to protect', not only in the humanitarian and human rights areas, but in the question of climate change as well. Everyone shares the responsibility to protect our planet and the human family. … Let us make the conscientious choice of refraining from lifestyles and behaviour that could worsen the state of our planet, and let us promote initiatives that protect and heal it. The world has become a village; thus, we must become more and more aware of this mutual and common responsibility. In particular, States have the grave duty to make policy decisions and devise monitoring structures to ensure that present and future generations live in a safe and worthy environment”, he concluded