Chaos as up to 200 anti-vaxxers storm London HQ of ITV News and Channel 4 News: Angry mob chases Jon Snow then orders terrified staff to 'get me Peston' before trying to invade Google office nearby
Hundreds of anti-vaxx protesters stormed the London headquarters of ITV News and Channel 4 News this afternoon, before then trying to invade a Google office. Up to 200 demonstrators broke into the building's lobby and demanded to speak to the broadcaster's bosses as part of a protest against vaccine passports and jabs for children. The scenes came just moments after crowds of angry protesters hurled abuse at veteran Channel 4 presenter Jon Snow, accusing him of not 'speaking up for the children', and called for political editor Robert Peston, as police officers tried to control the mob outside the studio. Newsreader Lucrezia Millarini was on air at the time and tweeted: 'Police at our building as anti-vaxx protestors get into the foyer. Luckily today's @itvnews was not disrupted.' 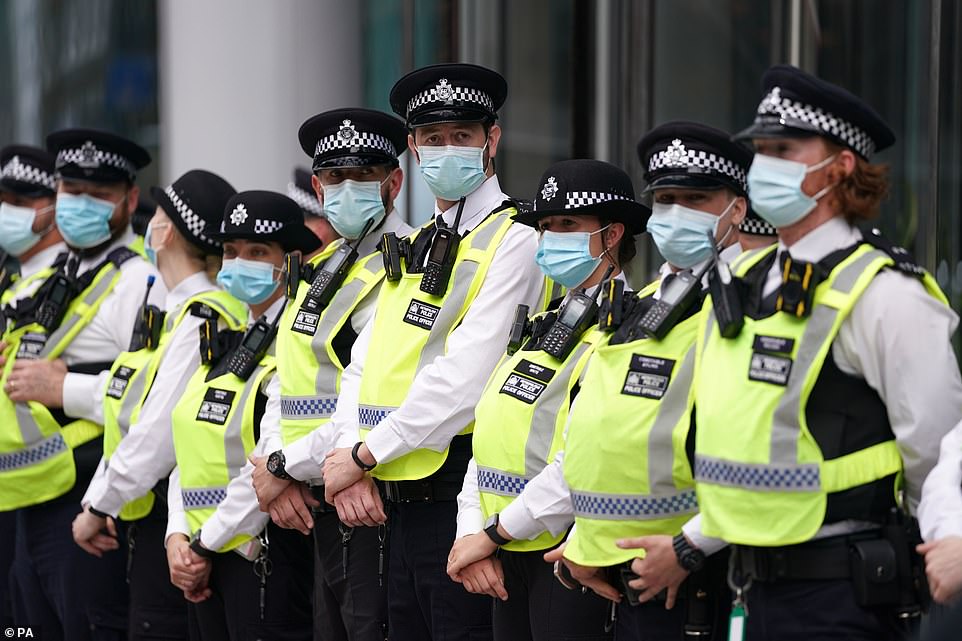 Shocking footage shows dozens of police officers forming a barrier against the activists, amid widespread shouting and desperate cries for the group to 'calm down'. Officers, many wearing face coverings, are seen pushing back members of the crowd as tensions clearly began to boil over. ITN said in a statement that the abuse of journalists because of their reporting on coronavirus was a 'worrying development, which the company said it had been 'closely monitoring'. Staff were advised to either remain in the building or stay away until the situation was dealt with just before 3.30pm, when protesters left the building. The group, which included anti-lockdown demonstrator Piers Corbyn, then made its way to the nearby Google building in Pancras Square, where an activist was filmed standing in front of a crowd with a megaphone, declaring: 'They are not giving you the right information.' Footage earlier showed police line up to block off the entrance to the building as one protester shouted: 'They're coming for our children.' Source
at August 23, 2021