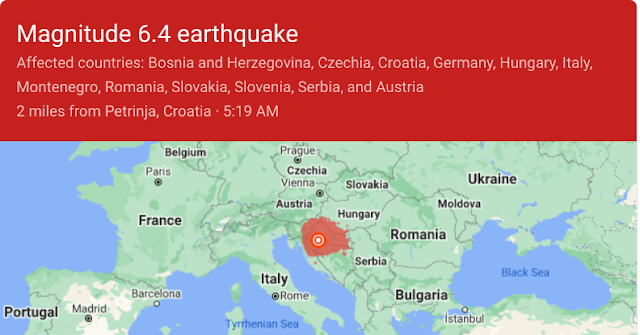 Water and fire in the interior of the Earth will rage violently and cause terrible earthquakes, whereby mountains and cities will sink into the depths. Our Lady of La Salette 19 Sept. 1846 (Published by Mélanie 1879)
“Several cities will be shaken down and swallowed up by earthquakes. People will believe that all is lost. Nothing will be seen but murder, nothing will be heard but the clash of arms and blasphemy. Our Lady of La Salette 19 Sept. 1846 (Published by Mélanie 1879)
Magnitude 6.3 earthquake strikes Croatia; 1 death reported
ZAGREB, Croatia -- A strong earthquake hit central Croatia on Tuesday, causing major damage to homes
and other buildings in a town southeast of the capital. Authorities said a girl was killed and at least 20 people were injured in the quake. The European Mediterranean Seismological Center said a magnitude 6.3 earthquake hit 46 kilometers (28 miles) southeast of Zagreb. Initial reports said the earthquake caused wide damage, collapsing roofs, building facades and even some entire buildings. The same area was struck by a 5.2 quake on Monday and several smaller aftershocks were felt Tuesday. Officials said a 12-year-old girl died in Petrinja, a town of some 25,000 people southeast of the capital that was hit hardest by the earthquake. At least 20 people were hospitalized with injuries, two with serious ones, they said. “The center of Petrinja as it used to be no longer exists,” Croatria's state HRT television said in its report. “One girl died and there are injuries and people inside collapsed buildings.” Source