We should trust the WHO and China this time around?

Bubonic plague is far deadlier than the Chinese Virus.... 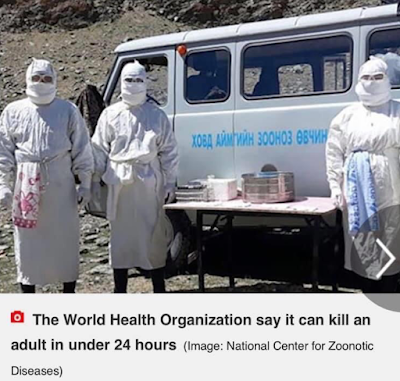 The World Health Organization (WHO) said Tuesday it was 'carefully' monitoring a case of bubonic plague in China after being notified by the authorities in Beijing.

A WHO official claimed today that the situation was being 'well managed' by China and not considered to represent a high risk.

A herdsman in China's northern Inner Mongolia region was confirmed at the weekend to have bubonic plague, known as the 'Black Death' in the Middle Ages.

Bubonic plague is one of the most devastating diseases in history, having killed around 100million people in the 14th century.

The news comes after the WHO also publicly praised China for what it called a speedy response to the new coronavirus throughout January.

The agency repeatedly thanked the Chinese government for sharing the genetic map of the virus 'immediately,' and said its work and commitment to transparency were 'very impressive, and beyond words'.

But in March, the WHO declared a pandemic caused by the coronavirus after it had spread to dozens of countries. The disease has so far killed more than 538,000 people worldwide.

The government of Bayan Nur, the Chinese city that reported the bubonic plague case, on Sunday issued an early epidemic warning after identifying the herdsman as a suspected patient.

The city is also known as Bayannur. The individual was confirmed to have the disease on the same day, sparking fears of a new disease outbreak amid the coronavirus pandemic.

Bayan Nur's Party secretary Chang Zhigang on Monday ordered the city's officials to ensure that all plague-prevention measures would be carried out thoroughly.

According to an official notice, Mr Chang demanded officials quarantine the patient's close contacts and set up checkpoints outside their residential compounds.